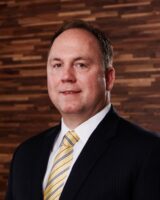 As General Counsel, Deron reports directly to the CEO and leads many corporate strategic initiatives, including utilizing his experiences in working with local governments on complex financial structures. Additionally, Deron identifies and pursues new multi-family and mixed-use development opportunities for Flaherty & Collins Properties. Deron is involved throughout the entire development, construction, and operations process to ensure the property is developed for and operates at maximum investment returns. During his nearly 7 years at Flaherty & Collins Properties, he has participated in the development of more than 1,100 units.

Married with three sons, Deron is an avid sports fan and the former Deputy Mayor of City of Indianapolis.

Deron has worked throughout his career to help bridge partnerships and strategies that work efficiently for cities and industries. He has negotiated public incentive requests for economic development projects, and private investments from businesses of all sizes, including multiple Fortune 500 companies, international companies and tech start-ups. As Executive Director and General Counsel of the Bond Bank, Deron managed a $5 billion debt portfolio for the City of Indianapolis as well as all municipal corporations.

Doctor of Jurisprudence, Indiana University School of Law – Bloomington, IN