CAPE CORAL, FL — The rest of the country is catching on to a slice of Southwest Florida paradise.

Since the pandemic, Cape Coral’s population has exploded. With 208,000 people, the Cape has almost double the populations of Fort Myers (96,000) and Naples (20,000) combined. The city said 15,000 people moved to Cape Coral over the course of the pandemic.

“The development community is seeing that. Retailers are seeing that,” said Noguera. “Medical office providers, including Lee Health, are all seeing that.”

But Noguera said developers need to act fast if they want a piece of the pie.

“I wish I had more commercial space to attract more investors to this area, but we’re running out of space,” said Noguera. 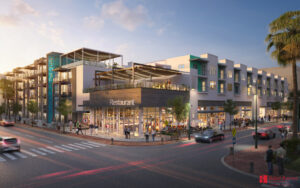 “Since the pandemic, this market has just been on fire,” said Brian Prince, vice president of development at Flaherty and Collins Properties.

While the company is based in Indianapolis, Prince said he knew the Cape was the right spot to build.

“We fell in love with it,” said Prince. “That was pre-COVID. We thought Cape Coral was a ripe spot for development.”

By February, Prince said his team will be ready to break ground on a massive project in downtown Cape Coral.

The Cove at 47th will consist of 290 multi-family units, a 525-space parking garage, 20,000 square feet of commercial space and a rooftop restaurant. It will be located along Cape Coral Parkway, west of SE 9th Place.

“What we’re really going for is a vibrant district,” said Prince. “We want the live-work-play concept.”