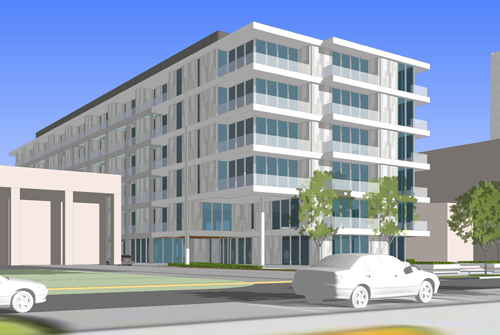 Plans are moving forward on two projects totaling $32 million that would bring a grocery store and about 140 apartments to a neglected stretch near 38th and Illinois streets.

They want to convert the structure, built in 1969, into 70 mixed-income apartment units with up to 15,000 square feet of street-level office space. The total investment is estimated at $15.6 million.

Also last summer, Flaherty & Collins Properties said it would partner with North United Methodist Church to develop the surface lot the church owns to the west of its property, which runs along the east side of Illinois Street between 38th and 39th streets.

Plans there call for a $16 million mixed-use development with 68 mixed-income apartment units anchored by a grocery.

The partners on the projects now are seeking to rezone the properties to accommodate mixed-use development and are expected to present their requests Aug. 10 to the Metropolitan Development Commission’s hearing examiner.

In addition, Midtown Indianapolis will ask to rezone the property at the northwest corner of 38th and Illinois streets, where the two-story Concord Building retail strip sits, with the intention to transform it into an incubator for fledgling businesses.

The requests seek to rezone a total of seven acres, as part of the Great Places 2020 initiative.

The citywide effort, led by the Local Initiatives Support Corp., aims to funnel private-sector investments into five neglected areas, including the area around 38th and Illinois known as Maple Crossing. The others are East Washington and Oxford streets (Englewood Village), West Michigan Street and King Avenue (River West), the Twin Aire neighborhood east of Fountain Square, and the area around 25th Street and Dr. Martin Luther King Jr. Street.

At Maple Crossing, Flaherty & Collins Properties and its partners on the two apartment projects plan to apply for affordable housing tax credits in November. If awarded, the partners would close on financing in March and possibly break ground on the projects by the end of 2018 to have them ready to lease the following summer, said Michael McKillip, executive director of Midtown Indianapolis.

“The bones of the building are a tank,” he said. “It will effectively be a new building, just using the bones of the concrete structure that are there.”

United Way had owned the building since 1992 but declined to dump millions into the building when it didn’t need the entire space. The agency now occupies 30,000 square feet at the State Auto building at 2955 N. Meridian St. across from the Children’s Museum of Indianapolis.

The former United Way building will be converted to 50 affordable units for seniors and 20 market-rate apartments, McKillip said. The 15,000 square feet of office space on the ground level will provide space for senior services.

The 68 mixed-income units to be built a block away by Flaherty & Collins Properties will be situated in two buildings. One, on the northeast corner of 38th and Illinois streets, would be anchored by a 25,000-square-foot grocery. The second would be on the same block but to the north, at the southeast corner of 39th and Illinois streets. It would include 10,000-square-feet of first-floor retail.

The Ace Hardware to the west of the church, which straddles the two project areas, will remain, McKillip said.

“We’ve had conversations with some strong [grocery] brands,” he said. “It’s a food desert.”

The neighborhood has been without a grocery since July 2015, when Double 8 closed its last four stores in Indianapolis. One was at 3902 N. Illinois St., less than a block north of where a new grocery would be built.

Noblesville businessman Gabriel Soukup is planning to open a microbrewery in the 8,500-square-foot space. The taproom is about 80 percent complete and could open in August, McKillip said.

Soukup is leasing the space from Double 8 ownership, but Midtown Indianapolis wants to purchase the building and open it to more tenants, McKillip said, because the brewery doesn’t need the entire space.

Midtown Indianapolis owns the Concord building at 3801 N. Illinois St. and plans to move there from 3965 N. Meridian St. The organization hopes to raise up to $750,000 to replace its 52 windows and heating and cooling system, among other improvements needed in its conversion to incubator space.