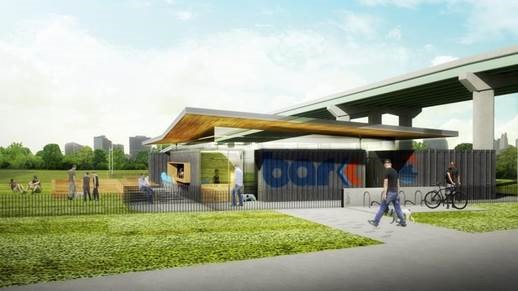 The Port Authority of Kansas City, or Port KC, announced this week that it plans to lease two acres on the western edge of Berkley Riverfront Park to a new business planning to build a dog park, complete with a bar and restaurant on the premises – aptly titled Bar K.

“Bar K is going to be a great additional amenity to the riverfront,” said Michael Collins, president and CEO of PortKC. “Many Berkley Riverfront Park visitors enjoy bringing their dogs to the park to run and play. This project gives us the opportunity to utilize ‘found space’ under the bridge and convert it into an exciting, dedicated, vibrant new meeting space for dogs, dog enthusiasts and others in Kansas City.”

In addition, Port KC announced in June that six sand volleyball courts and two kickball fields are taking shape at the east end of Berkley Riverfront Park and should be ready for play by August. The $200,000 project is funded by Port KC, which teamed with KC Crew to address growing demand for sports courts and green space in the downtown area, largely fueled by an influx of millennial residents.

The courts, which will have high-efficiency LED lights for night play, will be installed along with a new leisure area where people can bring their own bocce ball, badminton, croquet or other sports equipment. Later plans call for construction of a bocce court and other amenities.