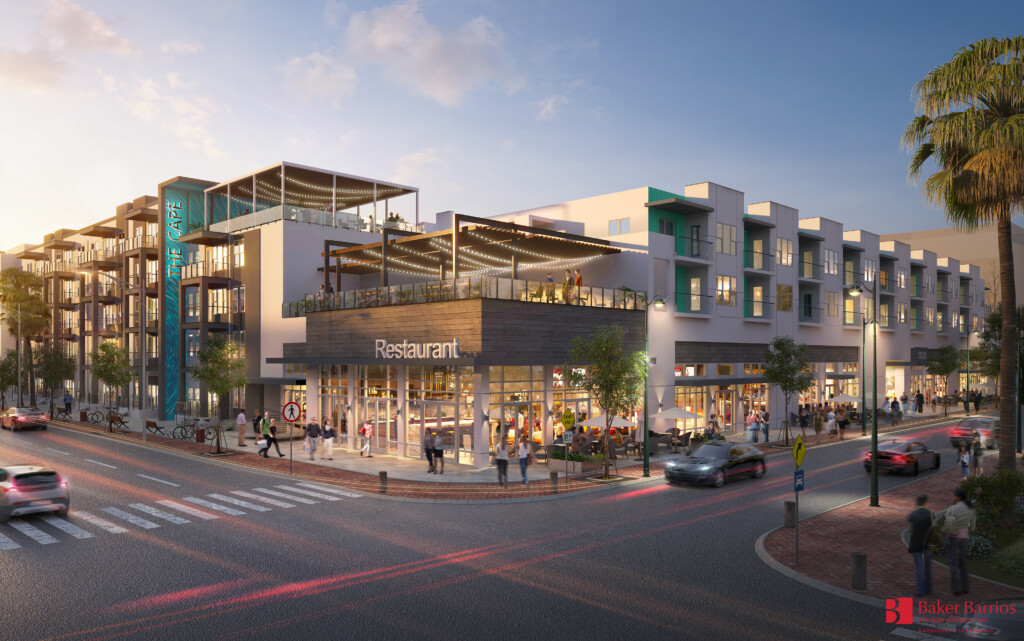 Like many Midwest developers, Indianapolis-based Flaherty & Collins Properties, which specializes in urban infill projects with a multifamily component, has long coveted the Florida market. Most of the reasons are relatively familiar, from chasing a compelling supply and demand dynamic to the firm’s CEO, David Flaherty, owing a condo in Naples.

But the vehicle for the company to break through in Florida, says Brian Prince, vice president of development, comes from an unlikely source: the U.S. Post office. That’s where Flaherty & Collins received a report that over the past year Cape Coral is the No. 1 destination nationwide people put down on change of address forms. “There’s a huge influx of people, many from the Midwest but the Northeast, too,” Prince says. “The population growth has been crazy…and that piece of data was the final push for us.”

That’s also why after some other potential projects in Florida, including one in Tampa, fizzled out, F&C set its sights on Cape Coral, a Lee County city with about 183,000 people. The $64 million public-private project the firm has proposed, in a part of the city known as the South Cape, is called The Cape at 47th. 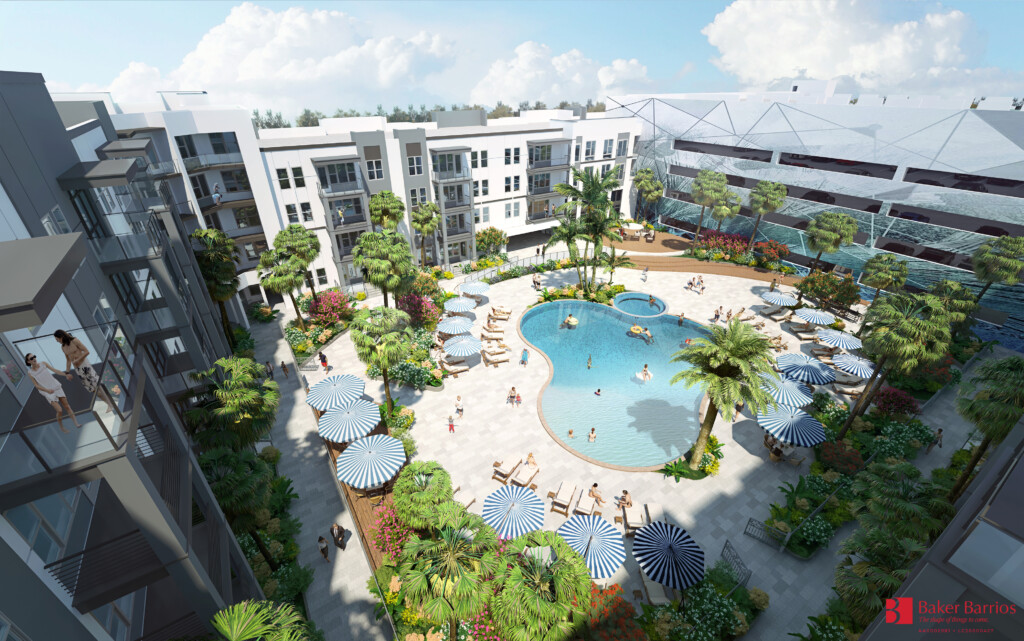 In addition to marking F&C’s Florida debut, the project, which calls for 280 apartments, 18,000 square feet of retail or office space and a 525-stall parking garage, is notable for several other reasons. For one it replaces Village Square, a $130 million mixed-use project proposed for the same site, from different developers, that stalled. Plans for Village Square date back to 2005 but were derailed — initially by the late 2000s recession and later by other financing challenges.

F&C is under contract to buy the 3.9-acre site for The Cape at 47th, in a deal brokered by Paulette duCharme Hansen with Miloff Aubuchon Realty Group in Cape Coral. Both F&C officials and duCharme Hansen decline to disclose the purchase price for the land, owned by Long Island, N.Y.-based developer Robbie Lee. Lee and his partners own the site through Downtown Village Square LLC. “The previous owners had various issues and their project is no longer viable,” duCharme Hansen says.

Another first with the project? The Cape at 47th, which includes a rooftop bar and lounge component, is the first infill residential project with a parking garage in Cape Coral.

The Cape at 47th also represents a major investment from Cape Coral city officials, who put together an incentive package worth about $10.3 million to share the costs with F&C. Cape Coral Economic & Business Development Manager Ricardo Noguera says while incentives for development are usually performance-based, The Cape at 47th is a special case. “It’s difficult for redevelopment agencies to provide upfront dollars,” Noguera says, “but the site (being empty) is holding back other projects in the South Cape. This is one of the most attractive projects in the Community Redevelopment Agency and it has sat vacant for nearly two decades.”

The incentive package, scheduled to go before the Cape Coral City Council in early August for final approval, includes some $350,000 in utility improvements, says Noguera. On the F&C side, the developer will be required to make 125 of the parking spots available to the public. The package doesn’t include another major expense the city is undertaking, in some $20 million in sewage upgrades. F&C officials call those upgrades critical, and without that work, Prince says the firm might have balked at the project.  “We need that so we can bring the project fully online,” he adds. 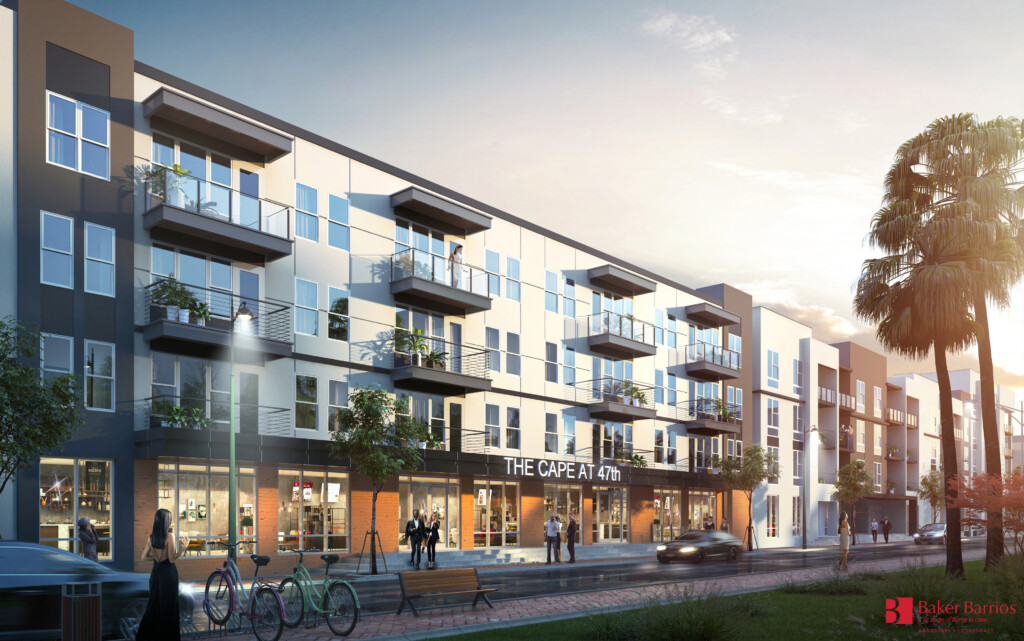 Prince says he hopes to break ground in early 2022, with possible completion in summer 2023.

A powerhouse in Indiana and some other Midwest states, F&C has developed more than $3 billion in multifamily projects over the past 15 years, in a variety of asset classes. That ranges from luxury to market-rate to affordable housing, Prince says. The firm was founded in 1993 and currently manages some 12,000 units. It has about 450 employees.

Florida has been a target for the firm for several years. But Prince knew little about Cape Coral five or six years ago when he attended the International Council of Shopping Centers conference in Las Vegas. He met Dana Brunett there, who was then head of economic development for Cape Coral and is now deputy director of Lee County Economic Development. Brunett convinced Prince to put Cape Coral at the top of F&C’s list of Florida markets.

An attorney who has been with F&C since 2014, Prince says the company looked at several sites but rather quickly zoned in on the Village Square property. Initially, the owners’ price was too high to make an infill project work there, he says, “but over the years we got them to come down from their price point.”

The Cape at 47th joins another large-scale mixed-use project proposed for that section of Cape Coral, near the Bimini Basin. Early plans for that project call for 186 residential units, 25,000 square feet of commercial space and a 5,500 square foot waterfront restaurant. It’s a $50 million project with potentially $7 million in tax rebate incentives.

“I’m hoping this is just the start,” of more projects in Cape Coral says duCharme Hansen, who has been involved in deals on both projects. “Development begets development.”

Combined, both projects also have the potential to lead the transformation of Cape Coral from a Fort Myers bedroom community to a vibrant live-work-play downtown, says Noguera. “Cape Coral is on the move,” he adds. “(These projects) will draw a lot more interest to Southwest Florida and Cape Coral.”

Noguera cites Insite Managed Solutions, a Cape Coral-based call center consulting firm with 60 employees as one company that stands to benefit from The Cape at 47th and the other development activity. The company has committed to doubling its payroll in the coming months, he says, and all those employees, many of them Gen Z and Millennials, will need places to live, eat and socialize.

Prince says The Cape at 47th is designed with that demographic in mind. That includes a resort-style pool and lots of nearby amenities and wow factors, such as the rooftop bar. Prince says F&C has signed a letter of intent with a well-known area restaurant firm to occupy the rooftop bar space, declining to identify the name. “Our goal is to help Cape Coral get younger in age,” he says. “How do you capture a younger demographic? You create something that isn’t in the market.”