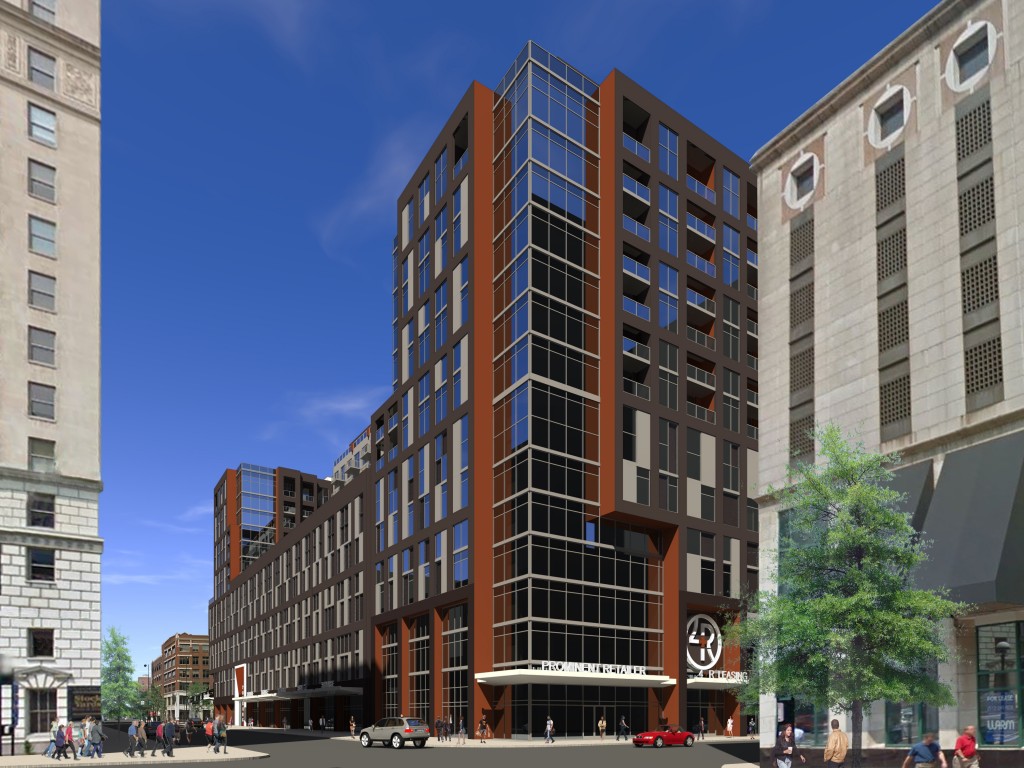 A three-year-old plan to build a new apartment complex and garage in a key corner of downtown Cincinnati is back on track after years of delays, political saber-rattling, review and revision.

Later this summer, the Cincinnati Center City Development Corp. will demolish Pogue’s Garage at Fourth and Race streets and begin building a new garage, the podium for a $106 million, 225-apartment luxury tower to be built and owned by Indianapolis-based Flaherty & Collins Properties. Demolition will take three to five months with construction of the 14-story building expected to begin by the end of the year.

The project will activate a sector of downtown that has some residential presence already with apartment and condo buildings on the west side of Fourth and Fifth streets, and, just as important, add much-needed supply to a Cincinnati housing market with pent-up demand.

“That’s a lot of bodies introduced to a part of town that straddles between Fountain Square and (west) Fourth Street where there is residential. There’s sort of a gap there, and this fills it in pretty well,” said Adam Gelter, 3CDC’s executive vice president for development. “Fourth Street in general, especially as you come east, is one of the better streets in town from an urban feel, but it isn’t tremendously active, particularly at night. The tenants on the first floor and the people above will bring a little bit more life to the street.”

Jim Crossin, Flaherty & Collins Properties vice president for development, said the company is happy with how plans for Fourth and Race turned out.

“We think the project will be a great success,” Crossin said. “3CDC — they operate a lot of parking facilities. They’ll also take care of the loan and lease of the ground-floor retail, which is in their area of expertise. Our business is multifamily development. It works out great that they’re doing those two portions of the project.”

The company was not fazed by the long process of dealing with a change in city administration and shifting priorities.

“Almost everything we do is a public-private partnership. The public side of most of our deals usually involves the local municipality,’’ Crossin said. “We like them because in the end, it’s usually an opportunity to develop a special project downtown where projects aren’t easy to get done. It takes often working through the political process to get it done.”

Like other recent, brand-new downtown apartment projects, nearly half of the building will be a parking garage. 3CDC will build seven stories – first-floor commercial space, plus six floors containing 700 parking spaces – and Flaherty & Collins Properties will build seven stories of apartments on top of that. Some parking will be reserved for residents while other spaces will replace those lost in the demolition of Pogue’s Garage.

The apartment tower will be C-shaped with an amenity deck on the eighth floor that includes a grilling area and resort-style outdoor pool.

Crossin said hiding the parking garage is an important architectural feature of the building. Atlanta-based Preston Partnerships, which designed the second phase of the Banks, will design the building, while Turner Construction will manage the construction.

“There’s screening on the garage to mask that it’s a parking garage,” Crossin said. “We wanted it to not look like a residential building sitting on top of a garage. We wanted a cohesive design that fits into the context of downtown.”

Flaherty & Collins Properties aimed for a ratio of 1.1 to 1.2 parking spaces per unit. Asked whether he believes additional downtown apartment towers will need as much parking in the future, Crossin said that while the streetcar could reduce parking needs, “We’re still in the Midwest where you may need to use your car less, but everybody needs a car.”

If residents become less dependent on their cars, Crossin said, the parking spaces could be used by others.

“If you add more jobs downtown, which definitely seems to be going in a positive direction, those people will need places to park.”

The project is “addition by subtraction,” Gelter said. It gets rid of a hideous parking garage that empties via ramps on city streets. 3CDC expects to open the new garage before the overall project is complete, as it did with the 84.51 center at Sixth and Race streets.

“If nothing went back, it would be better than it is today,” Gelter said.

“As we build around the country doing urban mixed-use, our residents – the No. 1 thing they want is a walkable, urban environment,” Crossin said. We wanted to have street-level retail space that serves as an amenity to residents.”

Flaherty & Collins Properties has developed 50 properties and 8,000 units, with many of their projects in Indiana.

The project will inject several hundred new residents in an area of downtown with a lot of longtime retailers, such as Koch Sporting Goods and Bromwell’s. Both developers and government leaders view downtown as having more demand than supply, with Downtown Cincinnati Inc. reporting an occupancy rate of 97 percent for residential units in 2015.

Even as Flaherty & Collins Properties worked through the Fourth and Race deal, it considered other Cincinnati projects. It has talked to some downtown parking lot owners who other developers have reported have been reluctant to sell or join developments as equity partners.

“We’re getting a subsidy from the city. The land is being contributed also,” Crossin said. “If it were Joe Smith with a parking lot that’s very valuable land worth several million bucks, it doesn’t work. If rents can continue to rise, we’ll reach a point where those deals do work without any help. I think the city’s hope is that they’re priming the pump.”

Flaherty & Collins Properties plans to keep looking for other projects.