City of Kokomo to provide $8.9 million in bonds for Development 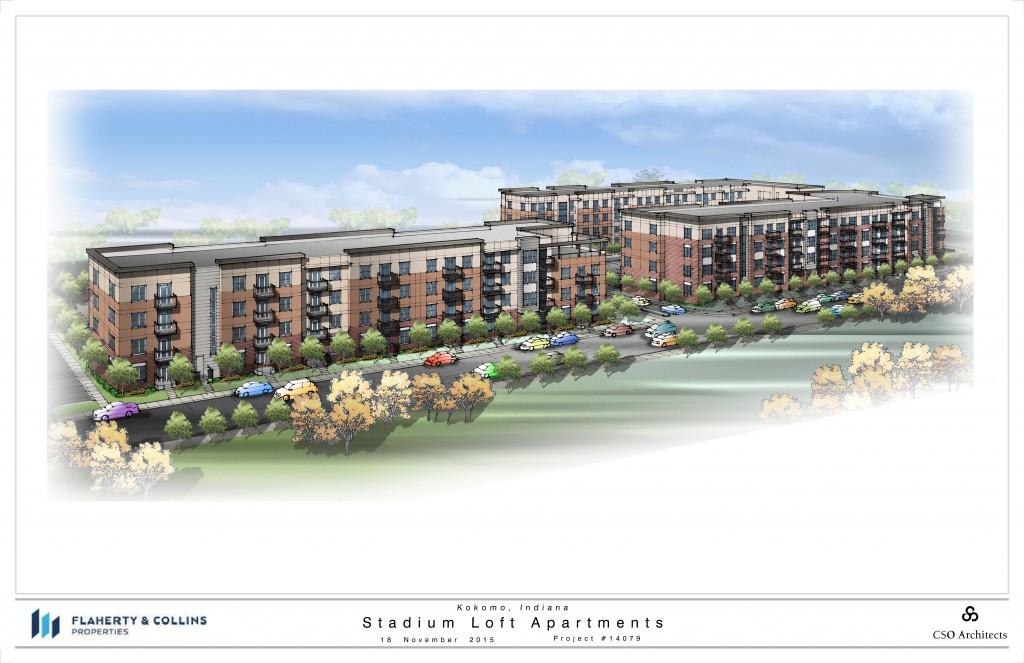 In an effort to assist the largest downtown investment in Kokomo history, city officials recently approved a measure providing millions of dollars in bonds to the development project in the former Northern Indiana Supply Company building.

With the passage of two ordinances, the bonds will be issued as separate contributions of $4.2 million and $4.7 million.

As explained by city development specialist David Tharp, the smaller portion is a TIF bond, meaning it will be paid back with revenues generated by Flaherty & Collins’ property taxes. The larger amount is an EDIT bond, which means it is backed with the city’s economic development income tax revenues.

“The revenue generated from this project will only go toward the payment of the TIF bond,” said Tharp, referring to the smaller contribution and noting the project overlaps two TIF districts. “In essence, the development itself will pay off this bond.”

In relation to the EDIT bond, Tharp said the city received over $1.9 million in 2015, and is expected to receive roughly $2.16 million in 2016 – revenue amounts that should pay off the bond without trouble. The bond will largely be used to cover the $3.5 million incentive to Flaherty & Collins, along with infrastructure and property acquisition costs incurred by the city, he said.

Tharp also took note of the state’s contribution to the project, which came in the form of tax credits.

Because the building is more than 100 years old, the developers were able to claim the maximum possible from the dinosaur tax credit, which allows developers and communities to receive up to 25 percent of the cost of redevelopment in state tax credits.

“Without these incentives from both the state and local governments, the NISCO building would likely have continued to remain vacant and deteriorate,” said Tharp. “The state’s DINO tax credits are really a key component to this development. Those credits required the city’s participation on this project.”

Also conveying the importance of the city’s participation in the redevelopment project was Common Council Vice President Mike Kennedy. Taking into consideration the area’s current lack of value, this project will be a serious boon to local economic development, he said.

“It’s more revitalization of an area that’s really not generating much in the way of revenue right now,” said Kennedy, expressing excitement about the project’s amenities, which include a dog park and upscale living arrangements.

“The millennials and empty nesters who now could probably afford to buy a house but don’t want to anymore, that is who we are trying to attract…And there is ripple effect. Companies that see what we are doing know that they need places for their employees to live.”

Developers are expected to build around 197 high-end apartment units as part of the $32 million project totaling 230,000 gross square feet. The mixed use development will be constructed on the site of the 104-year-old former NISCO building, placing the complex near the city’s recently-constructed $9 million Kokomo Municipal Stadium.

Construction is expected to begin in May, with completion slated for the summer of 2017.

While Flaherty & Collins Properties CEO David Flaherty said there isn’t a business committed to the space, the developer has “somebody we will be pursuing that we think will be a great asset for the baseball stadium.”

“What we’re doing here is carrying forward the vision Mayor Goodnight has for downtown Kokomo and that’s creating a sustainable, walkable, bike-able, connected downtown that is attractive to the top talent,” Flaherty said following the project’s announcement on Nov. 23. “The fact that the city stepped forward with the stadium was very attractive to us with the development and made us want to go forward with this significant investment.”