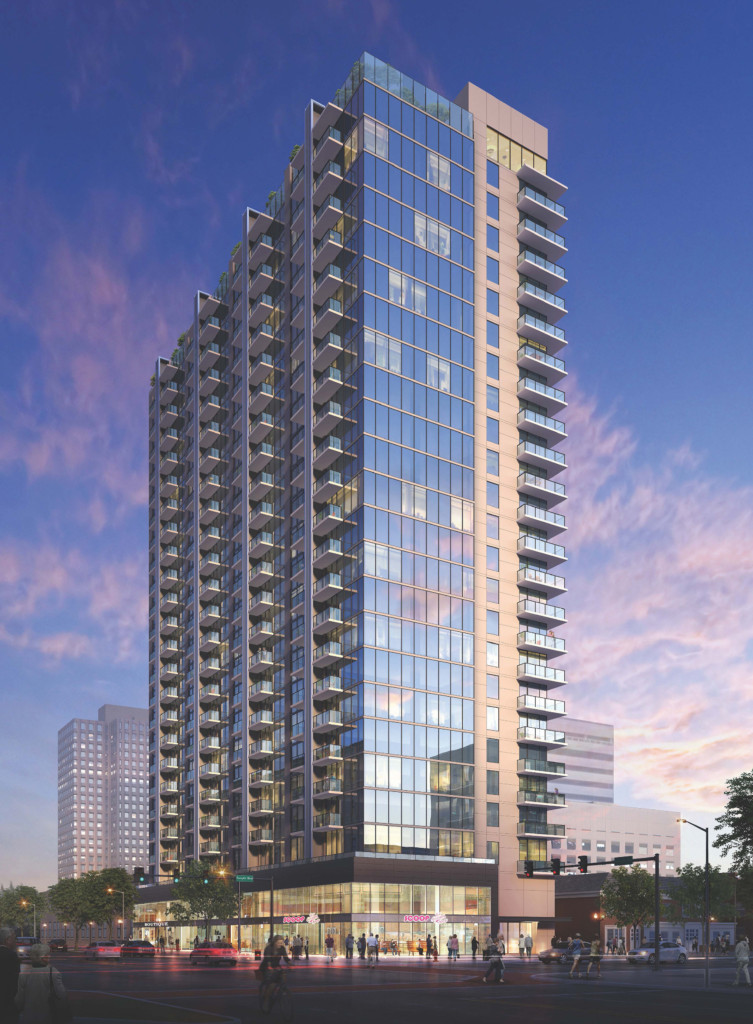 Clayton’s Downtown Master Plan vision is closer to reality thanks to a parking lot and a proactive redevelopment effort by the City of Clayton. Clayton officials announced today they negotiated a $1.1 million deal with Indianapolis-based developer Flaherty & Collins Properties to sell the city-owned parking lot at 8049 Forsyth to make way for a proposed top-of-the-market luxury apartment building at the corners of Brentwood Boulevard and Forsyth Avenue.

The proposed $100 million project will include an approximately 25-story apartment building with 250 units with penthouse suites and 10,000 square feet of street-level retail. Amenities include a rooftop saltwater pool, balcony views, yoga studios, fitness center, bike repair and storage, pet wash, and other attractive full-service options for active park-side living in downtown Clayton. The project will receive no tax incentives and is full taxable. A preliminary traffic study conducted by a third party engineer suggest that the project will not any significant impact to roadway infrastructure or drive times.

“Right now, we have a parking lot that does not contribute anything to our school district or city services, nor has for decades,” noted Clayton City Manager Craig Owens. “This project immediately contributes $1.1 million to fund other city needs, replaces or expands retail and restaurant parking, brings in a luxury residential tower and retail, and adds dramatically to the city and school tax base.” According to the Clayton School District, new construction – in particular multi-family housing – does not contribute at all to future enrollment.

The location was one of the top areas for redevelopment identified by Clayton residents during the 2010 Downtown Master Plan process. The current surface parking lot has 29 metered spaces, 100 leased spaces, and is owned and operated by the City of Clayton.

In 2016, Clayton issued a Request for Proposals to redevelop the surface parking lot to move forward with the Master Plan vision. The surface parking lot currently does not provide any revenue for Clayton schools and other taxing district despite its prime location across from Shaw Park. As part of the sale agreement, the project’s parking garage will provide at least 29 public spaces to serve nearby restaurants and coffee shops.

“People in St. Louis want this kind of top-of-the-line luxury apartment living, and downtown Clayton was the perfect market,” said lead project developer Deron Kintner of Flaherty & Collins Properties. “We are excited to partner with the City of Clayton and our neighbors, and we want it to be among the best places to live in the region, not just Clayton.”

The Clayton Plan Commission/Architectural Review Board will review the project’s Conceptual Plan at its February 21, 2017 meeting at Clayton City Hall.