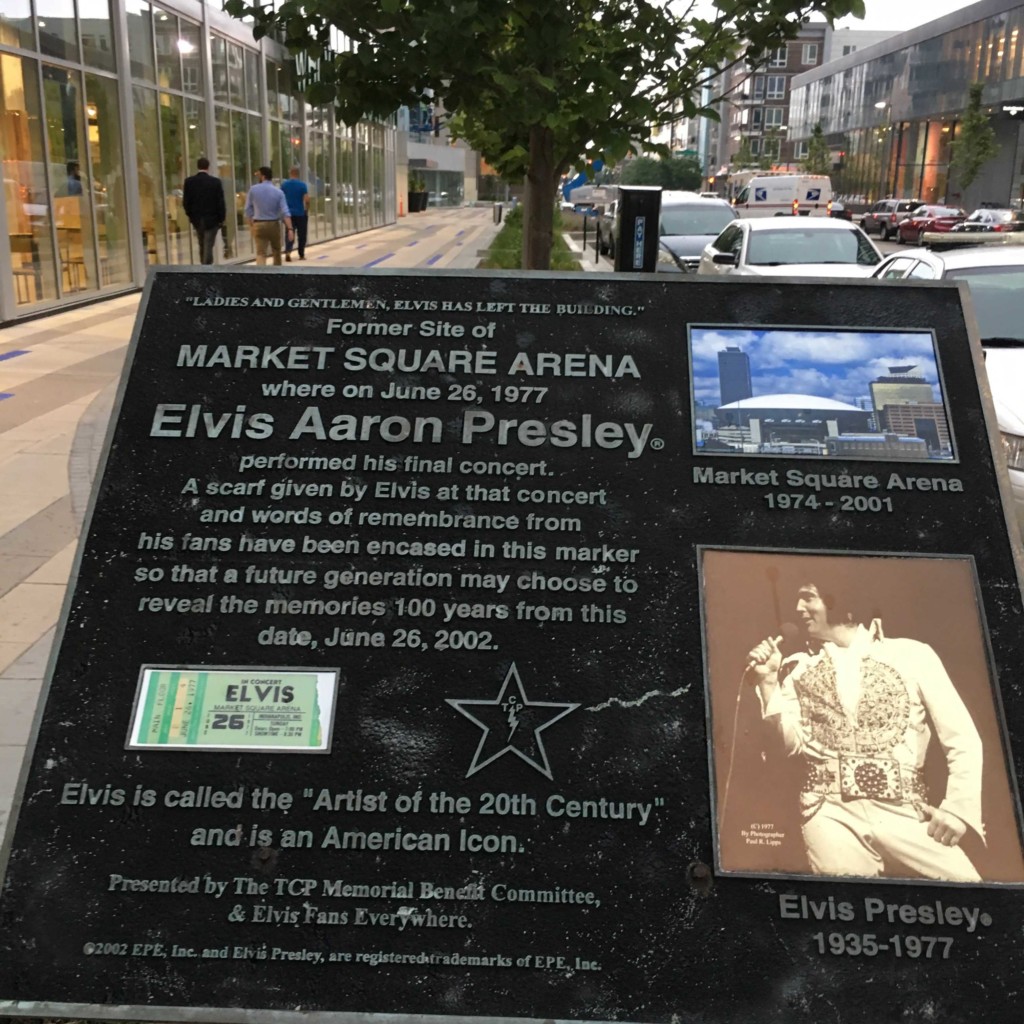 INDIANAPOLIS – Flaherty & Collins Properties and the Taking Care of Presley Memorial Benefit Committee will jointly rededicate the Elvis Presley Memorial Plaque tomorrow, June 26, 2018 at 11:30am, at 360 Market Square at the northeast intersection of Alabama and Market Streets in downtown Indianapolis.

The plaque, which honored the rock ‘n’ roll icon’s last concert at Market Square Arena on June 26, 1977, was originally dedicated at the former site along the Indianapolis Cultural Trail on June 26, 2002 – the concert’s 25th anniversary.

“Elvis Presley continues to be a significant part of music and our culture, even almost 42 years since his passing,” says Kay Lipps, who founded the Taking Care of Presley Memorial Benefit Committee with her late husband, Paul. “I am pleased that the marker is being rededication to commemorate the face that Elvis’ final performance was at Market Square Arena and in our city.”

The plaque was moved for safekeeping during the construction of 360 Market Square, a 28-story mixed-use luxury apartment high-rise featuring the new Whole Foods Market®. The lobby of 360 Market Square features an art piece that displays ticket stubs of many of the sporting events and concerts that took place at Market Square Arena, including a stub from Elvis’ last concert.

“We are thrilled to have this piece of history at the site,” says Jim Crossin, Vice President of Development for Flaherty & Collins Properties, who developed, owns and manages the 360 Market Square project. “It was important to honor and acknowledge the history of the site. So when the opportunity arose to provide a home to the memorial plaque, we jumped at the chance. We’re excited to help rededicate it and have it as a part of this dynamic 360 Market Square project, just outside of Whole Foods Market, where it will catch many eyes.”

The plaque includes a Paul Lipps photo of Presley wearing his “Aztec sundial” jumpsuit at that final 1977 Market Square Arena concert. In addition, there is a time capsule set to be opened on June 26, 2102 that includes fan letters, a cassette recording of the final concert, a Graceland catalogue and book of Elvis tour photos, among other items honoring “The King of Rock ‘N’ Roll.”