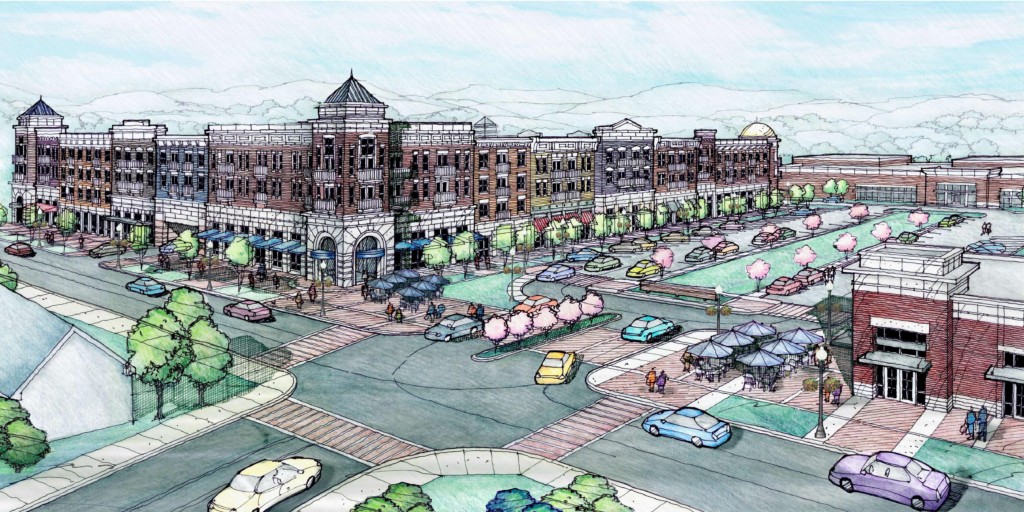 The development site was formerly occupied by St. Malachy Catholic Church and School on the west side of Green Street, and a dentist office and several small rental homes on the east side.

Kleinhenz said the development, which could eventually include a new town recreation center, represents what is likely the largest private investment in Brownsburg’s history.

The three developers — Scannell Properties, Envoy Inc. and Flaherty & Collins Properties — plan to put about $70 million into the projects that will bring new restaurants, retail shops, offices and hundreds of apartments to the heart of the Hendricks County town with a population of about 23,000. A 212-space parking garage, along with streetscape improvements, such as the addition of a dedicated left-turn lane, sidewalks and bike paths, rain gardens and other pedestrian amenities, are included in the plans.

Key to each of the three independent projects will be exterior designs that creates the feel of a downtown district.

Work also will include a new entrance to Arbuckle Acres Park and improvements to an east-west street between Green and Grant streets.

What remains of Brownsburg’s current downtown, a small business district ravaged over the past century by fires and the demolition of many of its original business buildings, is about three blocks south of the proposed new developments. As Brownsburg has boomed over the past decade, nearly doubling in population since 2010, much of the new retail and commercial development has been centered about a mile north near I-74 and Northfield Drive.

The new projects, Kleinhenz said, give the town an opportunity to recreate a downtown atmosphere, while bringing new and much-needed residential and retail options.

“This is a big deal for Brownsburg,” said Kleinhenz. “It represents a new kind of development for us. This kind of development is happening all over in the doughnut counties (outside Indianapolis), from Whiteland to Zionsville and Fishers and Carmel, and we’re excited to see is coming to Brownsburg.”

A two-story, 28,000-square-foot building on the northwest portion of the development site will be the first new construction. The project, developed by Indianapolis-based Envoy Inc., will include 115 individual office suites, according to Shelby Bowen, vice-president of development for Envoy.

The complex, which Bowen said will open in late 2017 or early next year, is similar to recent projects in Plainfield, Carmel, Fishers and Noblesville. It will include all-inclusive office spaces in various sizes, parking, conference rooms and “no-term” leases that make the space more accessible to new businesses.

“It will be great hub,” Bowen said, “for entrepreneurs and small businesses.”

Kleinhenz said the town is working with Flaherty & Collins Properties on plans for a mixed use development to the south of the Envoy office suites, also filling a portion of the former church site.

Tentative plans call for a multistory project, with commercial and retail space on the ground floor and apartments on the other floors. Kleinhenz said Flaherty & Collins Properties will invest about $30 million in the project that backs up to Arbuckle Acres, a 68-acre wooded park that includes baseball and softball diamonds, basketball and tennis courts, seven shelters and more than a mile of walking trails along White Lick Creek.

If the current negotiations are finalized soon, the town manager said the developer could break ground as early as this summer.
Read the article in full here.