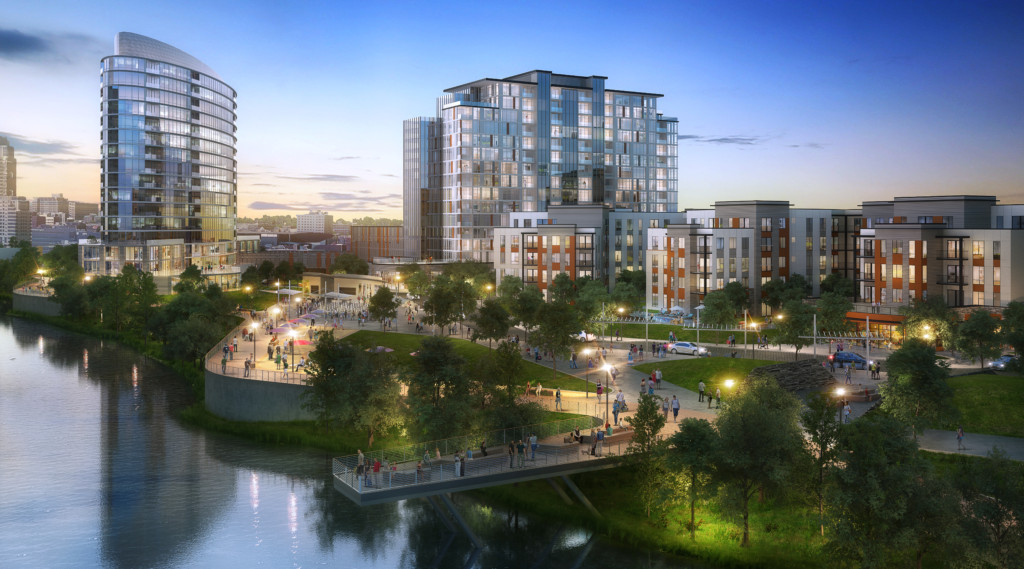 GRAND RAPIDS, MI — A luxury riverfront hotel, soccer stadium and apartments for seniors were among the proposals developers pitched to the city of Grand Rapids for its prime piece of real estate at 201 Market Ave.

After asking for developers to submit their best ideas for the 15.8-acre property in February, city officials received five proposals in April.

A committee tasked with overseeing the redevelopment of the site winnowed out two the developers — The Velmeir Companies and the Zimmer Group — and invited three to submit detailed plans: Flaherty & Collins, Rockford Construction and REDICO.

Their proposals have been reviewed in private behind closed doors by the committee, made up of the Downtown Development Authority, DGRI, the Grand Rapids Urban League, the Hispanic Center of Western Michigan and the commercial real estate firm the city has hired to facilitate the process, JLL.

The Grand Rapids Press/MLive obtained the proposals through a Freedom of Information Act request.

Read on to see which proposal won over the committee — and which two didn’t make the cut.

The city’s 15.8-acre property at 201 Market is used today as its home for garbage and recycling trucks, its snow plows, road salt stockpiles and its fleet maintenance garage.

That has meant the riverbanks along the Grand have mostly been overlooked.

The land has long been on the city’s list to sell off as an asset.

The property is also the site of the rejected “mystery project,” proposed a decade ago by Atlanta real estate developer Duane Faust. 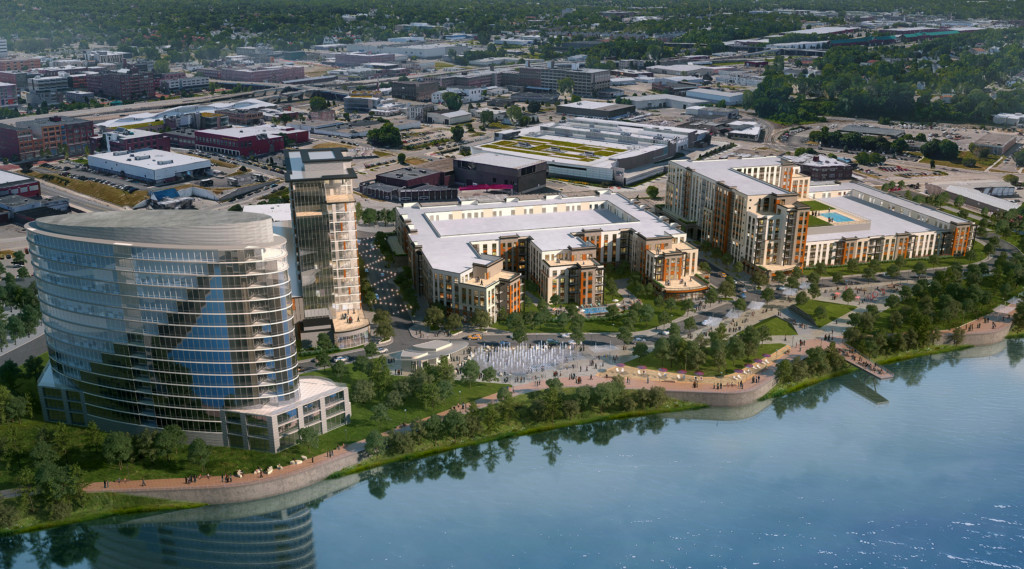 The evaluation committee liked the proposal from Indianapolis-based developer Flaherty & Collins Properties the best due to the proposed residential development for a range of income levels, and the large areas dedicated to public green space and open space.

This proposal from Flaherty & Collins Properties includes four buildings, which would be built in three phases.

Three of the buildings would line Market Avenue, leaving space for a riverfront plaza and park along the Grand.

Overall, the site would include a grocery store, luxury hotel, multiple mixed-use residential and retail buildings, a riverfront plaza and walkway along the Grand.

The developer is proposing extending Williams, Goodrich and Bartlett streets across Market Street to allow for access for bikes, cars and pedestrians. A new east-west street would be built through the middle of the site – Shore Drive – to allow for access to the river-facing hotel.

Two of the buildings would also include 64 units set aside as affordable options for families – with rents capped between 30 and 60 percent of the Area Median Income (AMI).

Flaherty & Collins is proposing housing units to fit several income levels in all three of its buildings. The first building would offer 185 market rate units, 37 restricted units for seniors and 24 units with rents capped at 80 percent of AMI.

Large courtyard spaces behind the building would face the riverfront.

The riverfront plaza and river walk would be also completed in the first phase. The plaza would include an interactive water fountain with water jets, as well as an outdoor performance and event venue. 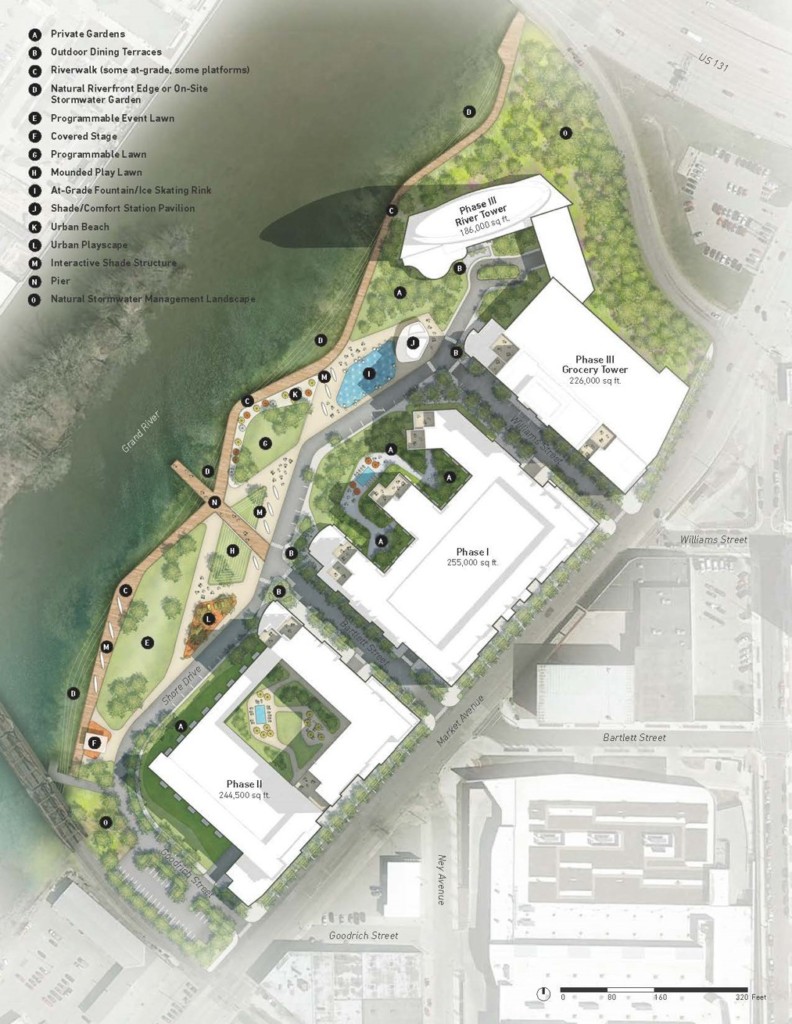 Phase II: The second building would be constructed on the southernmost end of the site.

Flaherty & Collins is proposing the second building also be mixed-use, with 250 housing units on the second to ninth floors, and retail space on the first floor. The building would offer 190 market rate units, 38 restricted units for seniors and 25 units with rents capped at 80 percent AMI.

A multi level parking deck would also be built in the center of the building.

Phase III: In the final phase of construction, Flaherty & Collins is proposing to add the most density to the site.

A tower would be built at the corner of Market Avenue and Williams Street, which will include a grocery store at street level and 200 residential units upstairs. The building would offer 150 market rate units, 30 restricted units for seniors and 20 units with rents capped at 80 percent AMI.

Another tower would be built along the riverfront for a luxury hotel.

Flaherty & Collins is now in the midst of an intensive due diligence period — a four to six month process that started in mid-October. City officials are further vetting their offer.

The deal for the city’s property will be a complex one, as the city needs to negotiate enough time and money to be able to relocate the multiple city departments and services that use 201 Market daily.

During the due diligence period, the city is still considering proposals from the two other finalist companies — REDICO and Rockford Construction — to be active offers.