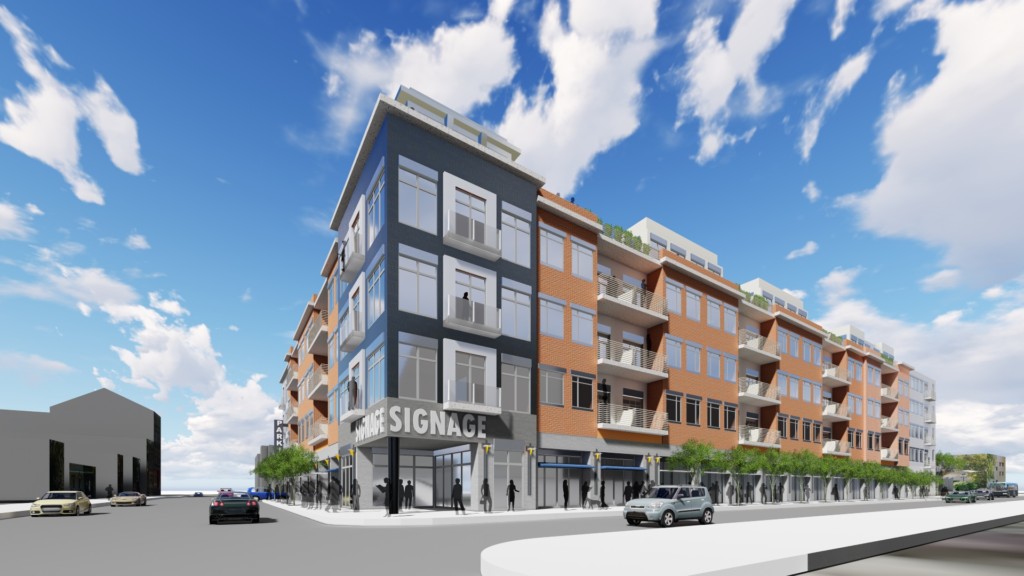 The 501 Main building and the adjacent parking lot will soon be home to a large apartment development with roughly 190 units.

And this time, the design includes the entirety of the parking area.

The Covington City Commission approved a development agreement with Indianapolis-based Flaherty & Collins Properties on Tuesday night and agreed to undertake the issuance of industrial building revenue bonds to finance the project.

“We’re very excited to be doing this project,” said Deron Kintner, of Flaherty & Collins Properties. He and his associates, including Mark Browning of Cincinnati-based PDT Architects, have visited Covington on multiple occasions, and held two public meetings with residents and business owners in Mainstrasse Village that have objected to the scale and look of the project. “In that time we have worked very diligently and very hard to come up with a design that is befitting of this neighborhood and this area of the city and I believe we have done that.”

He said the design presented to the city commission on Tuesday is “the best one”.

Browning said the project went through multiple designs and that to accommodate parking and other challenges, the height kept growing and at one point reached seven floors. This time, unlike the last visit the developers made in August, the entire site was able to be incorporated into the design because a sliver of the parking lot owned by Smith’s Muffler, which is located across the street, is now owned by the development.

“We have come up with something that meets all the objectives of the city and the neighborhood,” Kintner said.

The updated design increases the footprint of the two-level garage, one level of which will be underground, Browning said. “That does add considerably to the cost of the parking but it allows us to develop a project that isn’t so tall and feel like it’s more appropriate for the neighborhood,” the architect said.

When the project is completed, there will be more public parking at the site than currently available. City engineer Mike Yeager said that there are currently 247 spaces available to the public on the weekends, but that there would be 292 with the new garage, an increase of 20 percent. Of course, there will also be hundreds of new tenants, but Yeager said there would be opportunities to flex resident parking to maximize space.

The developers will complete the garage component first – a process expected to take six months. In the meantime, a parking mitigation plan from the city includes leaning on other nearby lots. Smith Muffler, for example, has between 50 and 70 spaces after business hours, Yeager said. Valet parking will accommodate 60 to 70 cars, and a shuttle opportunity with TANK may work in order to use the parking lot near the Clay Wade Bailey bridge. Other lots include John R. Green, Pershing Street, and Goebel Pool.

The housing component would be finished a year after the garage opens, giving the entire project an 18-month timeline.

Mayor Sherry Carran and the city commission thanked the developers for the work on the project and for adjusting the plans based on residents’ feedback and changing circumstances.