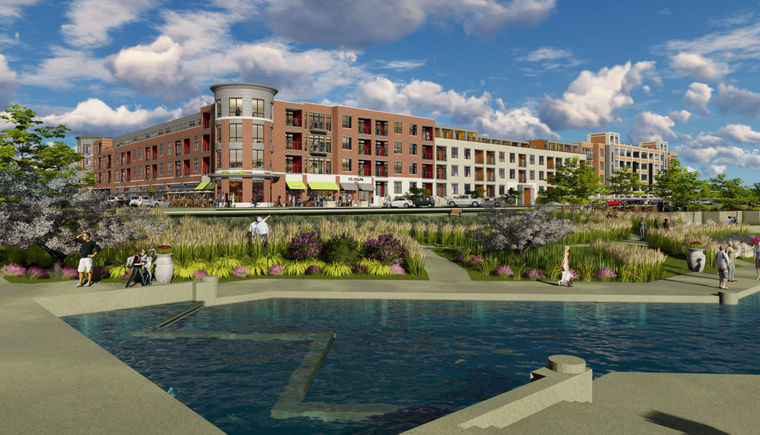 An Indianapolis developer is working up plans to fill two empty blocks just south of Beutter Park with a massive building that would include about 230 luxury apartments, retail space and a parking garage.

But this $40 million building hinges on the Regional Cities grant announced earlier for the St. Joseph, Elkhart and Marshall County area that awaits approval from the state legislature, Mayor Dave Wood revealed Monday. The city of Mishawaka wants to use $8 million of the $42 million grant for this area.

On the outside, the multi-story brick building would have a similar look as those in the Eddy Street Commons, with retail at street level and apartments above. The parking garage would include 150 spaces for the general public, in addition to spaces reserved for tenants. That would meet a need for the area that city staff had studied in recent years.

“We don’t want to be in the public garage business,” Wood said, noting that the city didn’t want to build one itself.

The developer, Flaherty & Collins Properties, would build and own the entire building, he said.

It is the only project for which Mishawaka applied for the Regional Cities funding, Wood said.

If approved, Regional Cities would chip in up to 20 percent of the project’s cost, or roughly $8 million to match an equal amount from the city. In addition, the developer would kick in roughly $24 million, or 60 percent, of the total project, he said.

To help pay for the deal, Wood said the city would create a separate tax increment finance district for just these two blocks. That way, he said, the city would cull property tax revenue directly from the project. Other Indiana communities, such as Fishers and Carmel, have used the same kind of TIF district, said Wood, who talked about his plans in an interview Monday morning and then elaborated during his State of the City in the evening.

Indiana’s General Assembly will have to decide on whether or not to pass the Regional Cities funding before its session closes, possibly by the end of this week.

The Regional Cities money had been added to the hotly contested road funding bill that came out of the Senate and that must now be approved by the House. Rep. David Niezgodski, D-South Bend, said he’s encouraged by remarks that some House Republicans have recently made in the media, suggesting their opposition to the bill’s road funding components is softening.

But, as another option, the money was also added to a separate bill in the House, a more popular bill that would give a 13th monthly paycheck to retired teachers and public employees. The Senate still must vote on that.

The Flaherty & Collins structure would again add to the growing amount of housing in both downtown South Bend and downtown Mishawaka. The River Rock Apartments, just north of the St. Joseph River, are rising with 72 units. And, also at the edge of Beutter Park, officials with the Barak Group have been working to secure financing for Riverfront Forge, the first phase of an upscale housing project, starting off with a 33-unit condominium building.

When asked, Wood said he feels that there is indeed a market for more rental housing — on top of the demand by people to live near amenities.

“Everything is full,” he said of the apartments in St. Joseph County, “and it’s putting a lot of pressure on rent.”