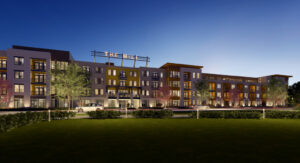 MISHAWAKA — The Mill at Ironworks Plaza began with a mysterious concrete box that rose four stories next to Beutter Park. Now, nearly two years after construction began, that public/private parking garage is wrapped with the windows and doors for retail and 232 apartments that its developer says will open this fall.

That comes as the city will begin this year to build the next transformation of Beutter Park: a beer garden.

A hair salon is the first and only retail tenant to sign a lease so far in the Mill at Ironworks Plaza, where developers hope to see a spread of eateries and shops. Kimberly Seely, owner of the Kalon Hair Lab, had to move out of her old spot next to Merrill Pharmacy on Main Street because her landlord planned to tear down the building (though not the pharmacy) — just across Main Street and the St. Joseph River. 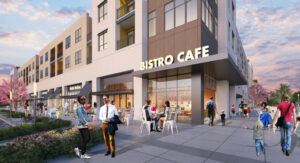 She looks forward to a larger space with room for more styling stations and added staff. She also looks forward to the walk-by traffic — and the new energy coming to downtown. Vacant city-owned lots, once a struggle for the city to find developers, are sparking activity. Other developers are making plans to build even more housing near the building as they eyeball the city’s other grassy lots next to it.

“Although it’s growing (downtown), it’s still limited,” said Seely on a recent day, working temporarily out of the former Buzz’s Used Furniture on Main. “It’s going to be awesome in five years.”

The Indianapolis-based developer, Flaherty & Collins, still has an ambitious amount of work to do on the Mill at Ironworks Plaza, but Brian Prince, vice president of development, said it should all be completed by mid-October.

In fact, he said, tenants could move into the first 100 apartments by mid- to late August, then the next 20 to 30 units in early September and the last 100 units in October.

An on-site leasing trailer opened with regular business hours in mid-May where people can inquire about monthly rents that range from $850 for a studio to a high-end 2-bedroom for almost $2,600.

Costs to build it have exceeded the original estimate of $45 million, but Prince said that will be covered by Flaherty & Collins. The city’s contribution remains the same: more than $9.5 million, plus $5.26 million from the state’s Regional Cities Initiative.

Meanwhile, in a neighboring lot southwest of the roundabout at Front and Spring streets, a few local developers plan to build more than 60 studio, one- and two-bedroom apartments and about 14,000 square feet of space for retail, restaurants and offices by next year.

Partner Patrick Matthews, of Granger, said this project isn’t spurred by the Mill at Ironworks Plaza, though he acknowledges that a “rising tide lifts all boats.” He believes his group’s apartments will be more intimate and “boutique” with refined finishes.

“There’s a pent-up demand due to the lack of housing that has been brought online (built) since the recession of 2008,” Matthews said. “Even though there has been a lot of activity, it still is not going to be enough to meet demand.”

Another developer, architect Scott Sivan, has been working with the city for three years on his plans to build 50 to 60 apartments at the southeast corner of Main and Mishawaka Avenue, where the city granted a tax abatement. Now he’s starting over with designs for about 25 condominiums that, likewise, would rise seven to eight floors.

He’s going with the condos, he said, because with the other apartments now in the works: “I don’t see the market being able to absorb that many units. Over the arc of five years, maybe. But not in the next two years.”

More than four years ago, he didn’t believe the market was right for condos as he started construction of the River Rock Apartments at the northwest corner of Mishawaka Avenue and Main, which opened in 2016. Its 73 units have remained nearly full, with just a handful of vacancies.

Over the last two years, though, Sivan said he’s observed a change in the markets with “a lot of empty nesters who don’t want a house.” He looks to the glassy Three Twenty at the Cascade building that’s now rising on the river in downtown South Bend — seven stories with 18 condos — as a “role model.”

Where is the right balance? Mishawaka Mayor Dave Wood said the city could spend a lot of money on a housing study, but it would quickly go out of date or sit on a shelf.

“We presume if someone is investing millions of their own dollars, they’re doing their homework,” he said. “That’s on them to do that research.” 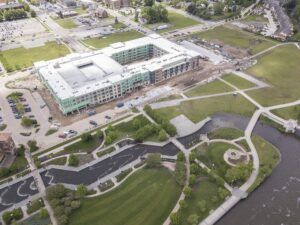 In the years ahead, Sivan is interested in developing on the city’s other grassy lots near Beutter Park, as are Flaherty & Collins and Matthews and partners. Wood said the city wants to see mixed use that improves the quality of life for residents, and that’s what developers are proposing so far.

Prince said the Mill at Ironworks Plaza will attract millenials and empty nesters who want an active lifestyle and closeness to downtown. Amenities will include rooms for bike storage, workshop space and fitness center, along with a large courtyard with a bark park for pets and a putting green.

Beyond the hair salon, he said, the developer has another 11,000 square feet of retail space to fill.

The sports bar Stacked Pickle had originally planned to open a restaurant there but not anymore. Its owner, former Indianapolis Colts player Gary Brackett, has since decided to operate it via a franchisee, leaving the location up to the franchisee.

But Prince said it’s typical of Flaherty & Collins’ large, mixed-use projects in other cities that most of the retail and restaurant space isn’t spoken for until after the building is finished. That will come, he said, as the site becomes a destination.

Once the building is open and once business owners have a better grasp of their time and resources, he said, “Then you can have more realistic conversations with retail.”

He is angling for local and regional businesses, adding, “I want something different, something unique here that feels authentic and home grown.”

National chains gravitate instead to the Grape Road/Main Street retail corridors where they pay loftier prices to rent space because of the high traffic volume, Prince said, adding, “These metrics (at Ironworks) don’t work out for them.”

Downtown developers often say they are attracted, in part, by the city’s popular parks and riverfront trails. The next phase will be a transformation of the Beutter Park space that spans the length of the Mill at Ironworks building and that will link with the pedestrian bridge over the river.

Construction will begin this year of parking and a beer garden, labeled with the German “biergarten,” that would have bathrooms, a pavilion, patio and picnic furniture. For special events, a concession structure would open its windows to serve drinks, Wood said. All of that should finish by spring 2020.

Yet to come to the same area is an ice skating ribbon and rink and a building that will house a cafe, rink rentals and event space. That won’t be built until 2022 and 2023 as the city budgets out its tax increment finance dollars, which will cover the costs, said city planner Ken Prince (no relation to Brian Prince).

On May 28, the city’s Board of Public Works awarded construction contracts for work starting this year. The parking, storm sewer, utilities, wall and river race work went to C&E Excavating, of Elkhart, for the lowest of three bids: more than $3.9 million. Construction of the beer garden went to South Bend-based Ziolkowski Construction, the only bidder, for almost $2 million.

Also this year, the city still plans to erect a board with digital screens at Mill and Front streets that will display artistic images of Princess Mishawaka, which would change based on the time of day or season. The city has earmarked $275,000 of tax increment finance dollars for it, though Wood said it could cost less.

At the western end of Beutter Park, nine condominiums are being added to the Townes at Kamm Island, completing the town homes that the local Concept Creations Development began building in 2007. Owner Dennis Murphy builds them as they’re sold — three out of the nine extra homes so far.

At the eastern end of Beutter Park, the IronWorks Building was built in 2008 to kick-start development in the city’s vacant parcels. Owners struggled to fill the spaces for several years until, finally, it was fully occupied in 2015 as Dave McAlpin and his wife, of Mishawaka, bought it. It’s still occupied.

The main floor, originally set up for a restaurant that never materialized, is now used by a Chapter 13 bankruptcy court, which reworked the space and closed off the double doors that had looked out on a park-side patio. The patio, suited to an eatery, is seldom used, McAlpin said. But as a tenant, he noted, the court is much less risky than the fickle nature of a restaurant.

The other two floors are filled with a dental clinic, an investment firm and a consulting firm.

And whenever critics on social media doubted that downtown could support the current growth of housing, they pointed to 11 brick town homes on Mishawaka Avenue, just west of Main, and how some of them remained unfinished or vacant for years. The town homes suffered most because they were built just as the 2008 recession broke, with prices close to $300,000. The real estate investment firm Banko Capital — whose properties include South Bend’s State Theater among many others — bought them in 2014, divided them and sold them to individual owners.

All are now occupied, with the last one sold about two years ago, said Banko’s owner, Assaf Dagan, who lives in Israel and has an office in Mishawaka.

Based on the “success” of selling those, Dagan said he’s exploring plans to build nine more town homes with similar designs on the vacant lot directly to the east. He said they would sell for slightly higher prices.

“We are encouraged because of all the development in the area,” Dagan said. “We think now is the right time to move forward, definitely.”