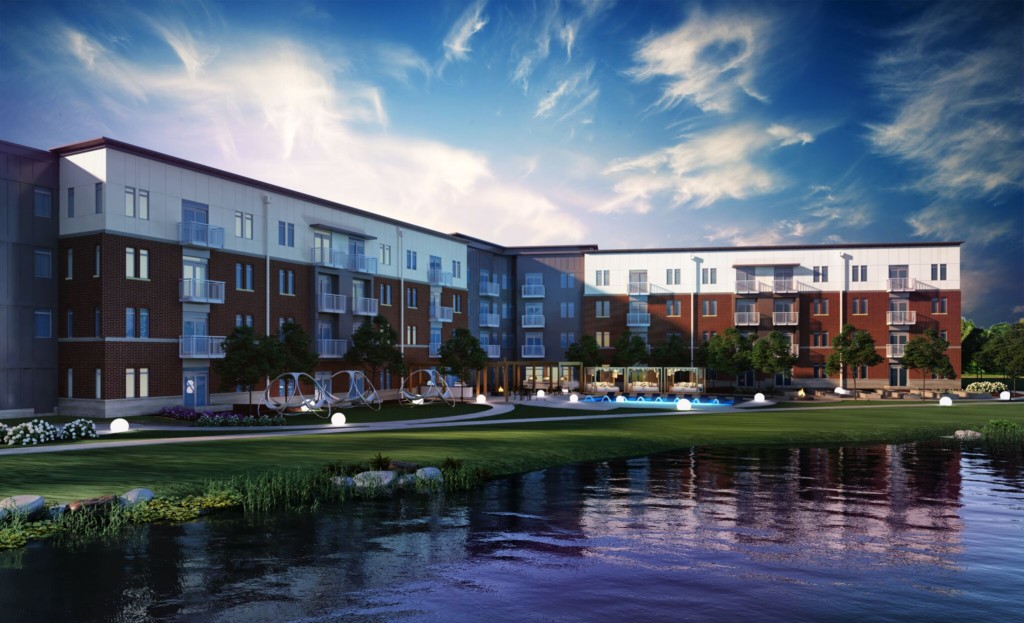 ELKHART — There have been murmurings for a while about what else is to come alongside and around the Elkhart Health, Fitness, Aquatics and Community Center near the heart of downtown.

On Thursday, the 17 people who have been working as the River District Implementation Team pulled back the curtain to unveil what’s being planned.

The proposed River District is stunning. The 105 acres, with another 45 along Jackson Boulevard east of Johnson, could be transformed in the coming years into a modern, walkable urban center.

More than 1,000 apartments, condos and townhouses could be constructed. The Martin’s Super Market is likely be relocated as part of the development, helped in part by Regional Cities funding. Other retail development is part of the plan and the entire district would look more like a burgeoning Indianapolis or Chicago neighborhood rather than what has been in Elkhart in the past.

The group, a mix of businesspeople, community leaders, city officials and consultants, showed the public how the area bordered by Main Street, Johnson Street and two rivers could look.

It started with replacing the aging YMCA building with an aquatic center. During conversations to envision, plan and raise funding for that, Dave Weaver, president and co-owner of KemKrest, kept raising “what if” questions, particularly related to a parking garage that was to be part of the project.

What resulted was this team that is actually a public-private partnership, according to Weaver and Pete McCown, president of the Community Foundation of Elkhart County.

Weaver and others put in private money to acquire property around the aquatic center. The city is also appropriating money for that.

The Elkhart City Council is in the process of approving $18.3 million for a phase of the River District to help pay for property acquisition, utility and Streetscape work along Jackson Boulevard, and the removal of a low-flow dam in the Elkhart River near Inova Federal Credit Union. Another $12 million from the city could come in a few months.

What Weaver and others are hoping for is investment by other local business leaders.

“We have an amazing economic engine here in Elkhart,” he said during a presentation to potential investors Thursday morning, the same day as the public unveiling. “We have an awesome economic engine. Now is the time to invest in ourselves.”

For the River District to become an actual walkable neighborhood rather than just pretty artistic renderings, it’ll take a total of $300 million.

That includes the aquatic center, the Flaherty & Collins Properties apartment project, Stonewater at the Riverwalk, that is going on the former Foundry site in the center of this district, and the new Martin’s store that Great Lakes Capital is funding.

Those projects are underway, so about $200 million more is needed to enact the rest of the plans. That’s a lot of money and Weaver and others are asking people who could write big checks to become investors.

The River District is a big bet for Elkhart. What is different about this proposal from others in the past is that it seems to be an actual public-private partnership that developed a big idea that could actually come to be.

This isn’t someone from the outside promising a big investment and lots of jobs, such as Wil Cashen did when he came to Elkhart County during the Great Recession touting electric vehicles.

This isn’t being led by a politician with an eye toward re-election, though Mayor Tim Neese is being fully supportive.

If the money is raised, the walking path is put in, and the trees are planted. It will change downtown Elkhart. It’s a good time, when the economy is good and money is flowing, for Elkhart and those who live here to attempt something of this scale.

Plenty of neighborhoods in Elkhart need attention and even transformation. The River District should be a diverse, welcoming place where all kinds of people are comfortable and proud, not a gentrified bubble. Yet this has the potential to attract residents who want to live in a place like what is envisioned.

The design is attractive and functional. This kind of development would not just shake off the rust of a Rust Belt city. It would make it a different kind of place.

Weaver says we have one shot to get this right, but the collaboration and excitement can make this happen. I hope he’s right. I really do.

Elkhart needs a big bet and for it to pay off.