The developers of Scioto Peninsula are honing their plans for the project as it prepares to break ground next year.

Columbus Downtown Development Corp., the master developer of the 26-acre strip of East Franklinton land, appeared at Columbus Downtown Commission Tuesday morning to sell the vision for the $250 million first phase of the development it unveiled in August. In tow were the trio of developers – Daimler Group Inc. and Rockbridge out of Columbus, and Flaherty & Collins Properties out of Indianapolis – it has picked to oversee the office, hotel and residential portions of its plan.

CDDC expects this first 9-acre phase to include 240,000 square feet of office space, 45,000 square feet of retail space, two hotels including one of 180 rooms, and 550 residential units, with parking garages bringing 1,200 to 1,400 parking spaces. The buildings range from eight to 11 stories.

The entire 26-acre site will be built out as the market demands it, according to the development group, but it thinks the peninsula can support up to 2 million square feet of office space, 200,000 square feet of retail, 1,800 residential units and 240 hotel rooms built out over eight to 10 years.

“All of this was set up to create a world-class mixed use development,” CDDC CEO Guy Worley told the Commission. “The best use of this land is to create as much density in possible. … We believe … Columbus has never had this much density on such a small piece of land in phase one.”

Deron Kintner, general counsel of Flaherty & Collins, said the residential units will “set the standard on luxury” and will have rooftop views and a sky deck to take advantage of the views in addition to first floor spaces. They’d command some of “the highest rents in the city,” Kintner said, but cater to young people and new urbanites who want flexibility, while maintaining the 20% affordable unit mix under the city’s new incentives policy. It’s not likely the project will have condos or for-sale units.

A few newly released renderings give subtle hints at the direction of the project’s evolving look, including additional rooftop green space and refinements to the design and architecture of the buildings for a more varied look from the initial vision released earlier this year. 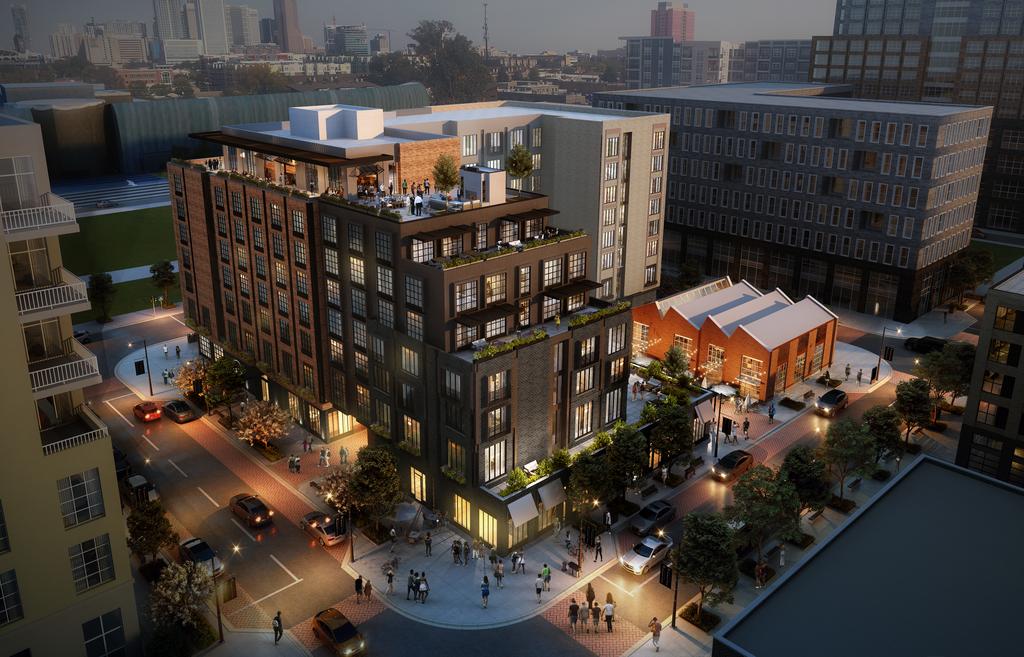 Robert White Jr., president of Daimler Group, said the office building would be the largest speculative office added to the downtown area since Miranova tower was completed over a decade ago. The 30,000-square-foot floor plates are aimed as open offices with balconies.

Chris Rupp, senior vice president of Rockbridge, said the hotel would be a “social hub of activity.”

“We put a lot of effort in carving up our site and provides room for retail and different experiences, not just for guests but our neighbors as well,” Rupp said. Coffee shops, a signature restaurant and multiple retail outlets on the ground floor would make “social opportunities” to keep the neighborhood active into the evenings. The hotel will have some meeting space.

The commission was generally supportive of the initial concepts, but members were particularly concerned that the project interact with Franklinton’s existing neighborhood and not push residents out.

Commission Vice Chairman Otto Beatty Jr. said the project would be “terrific for the city.”

The project’s buildings must receive approval from the commission in the future once the design is further along, likely in the first quarter of next year. CDDC estimates the entire phase one will start in spring through fall 2020 and be done in 2022. Some initial work, including the demolition of a small building at 322 W. State St., could start sooner.

The project has been several years in the works. CDDC first began working on a plan for the development in hopes of selecting one developer for the entire tract. Initially it announced that project would be led by Indianapolis-based Buckingham Cos., but that developer parted ways with CDDC following disagreements on the project’s scope.

Buckingham’s plan had been for 1,700 residential units, 800,000 square feet of office space, 150,000 square feet of restaurant and retail space, and a 150-room hotel. Instead, CDDC announced it was going to split up the 26-acre parcel of land and open it up for multiple developers to build piecemeal.

It’s likely, given the $250 million price tag of this nine acres, that the project will blow past the $500 million number floated on the total project just a few years ago.

“We wanted to be right, rather than quick, which is why there has been multiple iterations of this,” said CDDC COO Amy Taylor. “This can take the best of both the central business district and Franklinton and be a gateway to both.”