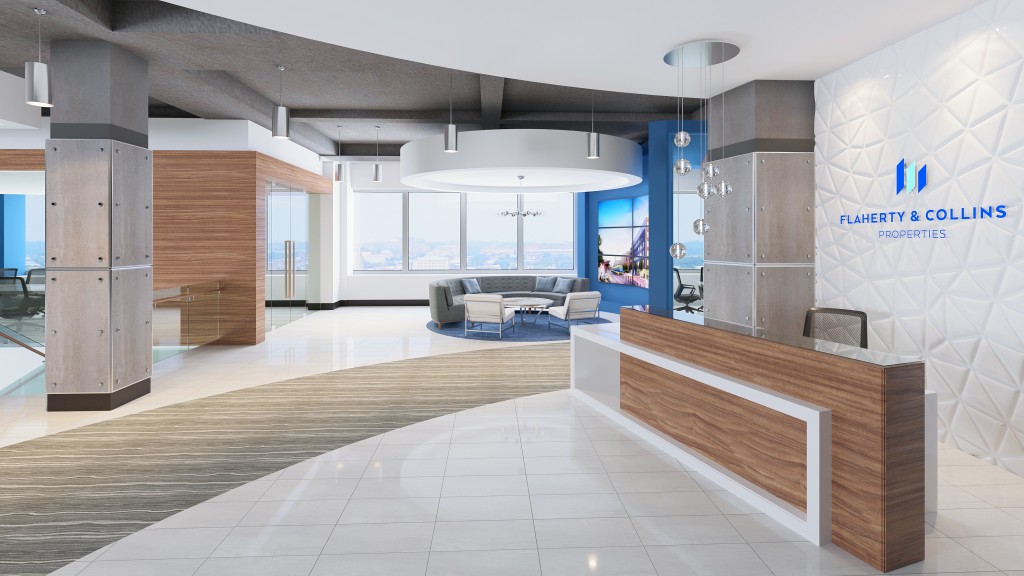 INDIANAPOLIS, IN – Flaherty & Collins Properties has announced plans to move its corporate headquarters and over 75 corporate employees to Regions Tower in Downtown Indianapolis.

“We are excited to move our corporate office to Downtown Indianapolis,” said David Flaherty, CEO of Flaherty & Collins Properties. “Our new space reflects our growth as a company and puts us in the heart of a thriving urban area, where we specialize in many public/private, mixed-use projects both in Central Indiana and around the country. Perhaps most importantly, it allows us the ability to recruit the best and brightest from our industry by offering a tremendous employee environment that is walkable, bike-friendly, and truly, a live, work, play location.”

Flaherty & Collins Properties specializes in mixed-use developments and public/private partnerships of multifamily housing, in both luxury, market rate and affordable housing. The firm is comprised of development, management and construction divisions that comprises over 450 total employees throughout the country. The company will bring over 80 high-paying jobs to downtown Indianapolis, a move that ties in well with the company’s development philosophy of urban, mixed-use projects set in the heart of a downtown area.

“We are absolutely thrilled to welcome the corporate offices of Flaherty & Collins Properties to Downtown Indianapolis,” said Sherry Seiwert, president and CEO of Downtown Indy, Inc. “The leadership team from Flaherty & Collins Properties are already outstanding partners and advocates for Downtown living here in Indianapolis, and this move demonstrates the attractiveness of working in our vibrant Downtown. We can’t wait to welcome all of their team.”

The company will occupy the 30th floor and part of the 29th floor at Regions Tower for 24,493 square feet of space. Flaherty & Collins Properties will move into the space later fall after building out the office area with high-end amenities and finishes. Mitsch Design will oversee the design and buildout of the space.

“Office space is not about the space and how people use it, it is about how can a space support a company’s culture and the people that bring it to life,” says Keith Cole, principal with Mitsch Design. Cole sees Flaherty & Collins Properties as ahead of the curve with its buildout, a reflection of the company’s culture and what modern employees are looking for.

“Over the coming years, the most significant change in office space and office buildings will be making the office a more comfortable work environment,” says Cole, who has worked with Flaherty & Collins Properties on building out amenity space for many of its recent developments, including The Depot at Nickel Plate in Fishers and 360 Market Square in downtown Indianapolis. “Let’s face it, we all spend more and more time at the office and less at home. For companies with great cultures, people love to connect with their “family” in the work place. To achieve this, you will see more residential and amenity settings.”

The move and office space design go hand-in-hand for Flaherty & Collins Properties, which has been headquartered on the North side of Indianapolis at Keystone at the Crossing for the past 12 years.

“It was important for us to be in the heart of a thriving, bustling area,” said Jerry Collins, President of Flaherty & Collins Properties. “We started out here in 1993 and with all the projects we’ve down in major urban areas, this just makes sense and works with what we do. We talk a lot about urban, walkable areas with shopping and dining options, and as we continue to attract more employees to our corporate headquarters, we wanted our company to reflect what we’ve been doing with our projects.”

While the current office space features brass and traditional wood paneling, the new space will feature bright colors, glass walls and high-end finishes, Flaherty said, to give the space a modern and sleek look. The space also will be open to encourage interaction, and intermixed with treadmill desks, a Golden Tee golf arcade game and either shuffleboard or a pool table to help employees blow off steam.

“Office space plays a key role in a company’s culture and its ability to attract and retain top talent,” Crisp said. “The recent announcement of quality firms relocating their operations to downtown is confirmation of downtown’s appeal to the workforce. It’s a testament to the hard work of groups like Indy Chamber, Downtown Indy, Visit Indy and all of the other civic organizations that make our city great.”

In business since 1993, Indianapolis-based Flaherty & Collins Properties is an award-winning developer, builder and manager of mixed-use, multifamily properties. The firm manages 15,700-plus units and 109 properties across 13 states and has over a half billion in development in Indianapolis, New Albany, Kokomo, Tulsa, Kansas City, Cincinnati, St. Paul, Chicago and Washington, D.C. For more information about the company, go to www.flco.com or call 317-816-9300.