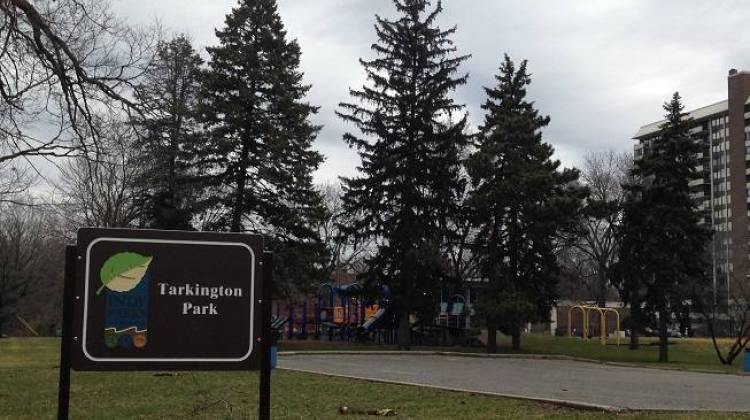 With a revived green space, Indy hopes to build a developer’s playground in an area that has been sliding.

If you’ve driven down Meridian or Illinois streets this winter, you know the days of nobody doing anything are over. Construction vehicles have been transforming a portion of Tarkington Park into what organizers hope will be a destination green space complete with a spray plaza, cafe, and playground. When the $5.6 million upgrade debuts this summer, Midtown and its many partner institutions don’t expect to see apartment buildings, restaurants, and shops move into the area overnight. But the group isn’t waiting for development with fingers crossed, either. What was once a glorified neighborhood association is looking into buying properties. Working with one of the city’s largest developers, Midtown plans to break ground on several major projects in the area in the next few years. Organizers believe the park will lead to investment, which in turn will lead to a safer neighborhood.

When the city purchased two square blocks near 38th and Meridian streets in 1945 to establish a new park, Pulitzer Prize–winning author Booth Tarkington lived a short walk from the meadow that would bear his name. The surrounding Butler-Tarkington neighborhood was home to some of the city’s most successful people, including the Vonneguts. Butler University recently had moved from Irvington to its present location.

Every park in the city has a “master plan.” Indy last updated Tarkington Park’s version in 1985. When the tennis shelter came down and the design buffs rose up, Indy Parks committed funds to draft a new master plan. With Midtown overseeing things, the landscape architecture and design firm Rundell Ernstberger Associates—which drafted the Cultural Trail—researched urban parks around the country. They came back with a $12 million plan for a very different kind of recreation hub.

Of course, Indianapolis doesn’t have a lot of $12 million parks. Even the proposed $5 million Phase 1 seemed like a long shot. As of 2013, not a single dollar had been allocated to bring in the first bulldozer. Which is why Butler-Tarkington was lucky to have former city-county councilman John Barth as a resident. Barth saw an opportunity to move $1 million in anticipated tax revenue (called tax increment financing) from a development going up in Broad Ripple to Tarkington Park. That inspired the Indianapolis Parks Foundation to chip in $1 million of its $10 million Lilly Endowment Fund, which convinced the Department of Public Works to invest the other $3 million. In the process, Great Places 2020—a new city initiative focusing investment on tightly defined areas—picked the neighborhood as one of its three pilot locations. That meant hundreds of thousands of dollars more for facade improvements to businesses around the park as well as retail feasibility studies and brownfield clean-up.

If you’re looking for monkey bars and merry-go-rounds, you won’t find them at the new Tarkington Park. Instead of traditional playground features, there will be a rolling landscape of rubberized mounds and climbing walls. Where there were large grassy expanses, there will be plazas made of pavers. Long, linear benches enclosing areas will take the place of classic two-seaters. Cafe and stage pavilions may turn heads with their contemporary architecture. A spray plaza will allow kids to get wet. “This is not your grandfather’s park, where you go for a stroll under the shade trees,” says Kevin Osburn, principal at Rundell Ernstberger, which designed the layout. “It’s the kind of thing you’d find in a bigger city, something no one has really seen in Indianapolis.”

Skeptics who doubt the impact such a green space can have on a troubled area need only look as far as Washington Park in Cincinnati. At the beginning of the 21st century, the Over-the-Rhine neighborhood surrounding it had 25 percent unemployment and 58 percent of residents living below the poverty line. A group there similar to Midtown partnered with the city, overhauled the lawn with many of the same features you’ll see at Tarkington Park, and pushed for development. Since then, $500 million has poured into the neighborhood. Crime has dropped 50 percent in 10 years.

As for Phase 2, it will cost an additional $8 million. A dog park, a farmers market shelter, a stage, and a multi-use  field all could be in the works. But if Midtown has to raise the money as it did for Phase 1, those things will never happen. McKillip and his partners are counting on development in the area to produce tax revenue to pay for the rest. Most of the commercial properties surrounding Tarkington Park sit vacant and for sale. Individually, none of them amount to a viable project for a developer because rents are depressed in the area, and you need to build hundreds of apartments to justify bringing in a construction team.

That’s why Midtown pitched Flaherty & Collins Properties, a local company with a community development wing, on tackling the entire neighborhood. Together they started reaching out to the owners of derelict or unused properties—the empty brick building at 38th and Illinois streets that used to be a Foot Locker; the large parking lot behind the North United Methodist Church; the former site of Double 8 Foods; the vacant spots in the Melody Inn strip mall; the oversized United Way building on Meridian Street. With low-interest loans, Midtown hopes to acquire all of them in the next few years.

Perhaps the most pressing thing to attract is a grocery store. When Double 8 closed last year, it created a food desert in southern Butler-Tarkington. Grocery stores require a lot more than the 1,500 people currently living in that half-square-mile to survive. So Midtown hopes to break ground next year on a series of mixed-use apartment buildings around the park that will be supported by tax credits. Exactly where remains to be seen. Although McKillip expects to see $50 million invested in the area, including 400 new apartments and 45,000 square feet of retail, much of it will take until 2020 to materialize. And Phase 2 of the park, which relies on taxes from those projects? Even longer.

But Midtown fought 10 years to get this far. And when IndyGo’s new bus rapid transit Red Line carves two lanes out of busy 38th Street next year—a project that itself has been the source of some speculation—McKillip hopes the traffic calming and connectivity will keep the neighborhood’s political momentum going. If anything, the recent crime wave around the park has only strengthened his commitment.

“We’re not going to solve that problem by continually displacing people,” McKillip says. “Increased police presence isn’t going to fix it. We have to improve the social condition. Every group that can make things happen in this city—every philanthropic funder, major bank, city agency, and neighborhood association in the area—is now part of this project. If we can’t get it done, it can’t be done.”

*This is only a condensed version of the article found in the March 2016 issue of Indianapolis Monthly. To read the entire article in full, click HERE or click the link below.