IndyStar: How Fishers is Bringing People out of cul-de-sacs 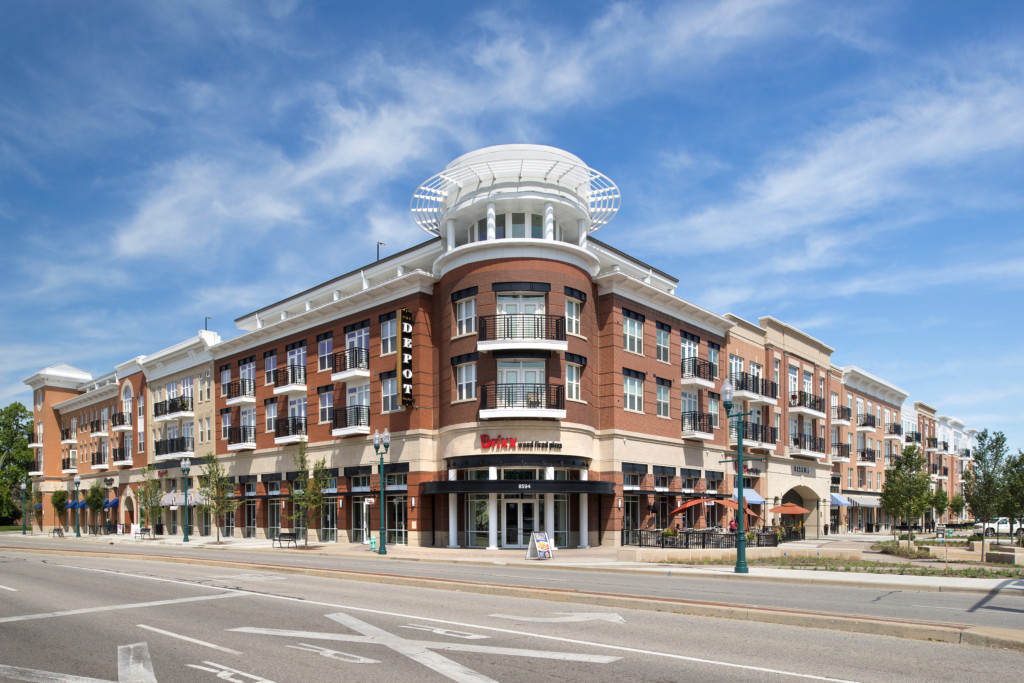 Fishers is a city at once trying to catapult to a dynamic future and capture a leisurely, idyllic past.

The modern apartments are intended to increase the population density and cultivate an environment where residents walk to cafes and mingle, as they might have done on Main Streets in the past.The twinkling offices are meant to attract digital-forward businesses in information technology, bio-sciences and agri-business, where low-resting couches, not high-back chairs and desks, furnish offices.

The result, for now, is a city on the make, one speeding so fast it’s outpacing its master plan. At the same time, the city is eager to cling to its history. Officials even gave the downtown a name — the Nickel Plate District — to acknowledge a shuttered railroad that used to stop there.

“I want to pull people out of their cul-de-sacs and into gathering spaces,” Mayor Scott Fadness said. “For years we were building apartment complexes where they didn’t make any sense. Those spots are good for single family homes. That’s what we’re changing, to become like more traditional downtowns.”

The physical change rides on the back of a population explosion; with nearly 90,000 residents, Fishers is now the fifth largest city in Indiana. In 1990, 7,500 people resided there. Two years ago the town became a city, and its residents elected Fadness, formerly town manager, its first mayor.

“Ours is a history of change. We are open to it and we expect it,” Fadness said.

What was once a lazy downtown with few rental units and a smattering of chain stores in strip malls is now a dense hub where young office workers and new downtown residents share coffee at Starbucks or drop in for lunch at several new eateries that line 116th Street.

In three years, 360 apartments have been added in two buildings on 116th Street and Municipal Drive, The Depot at Nickel Plate and the Switch at Fishers, which hug the entrance to City Hall. The newest project to rise is 1 North, a development that will feature a dozen first-floor storefronts with apartments attached, as well as 220 standard apartments.

“The city is extremely bullish on the rental market,” Hardin said.

The Nickel Plate development doesn’t even include three massive projects just across I-69. A 289,000-square-foot Ikea furniture store is scheduled to open this year, as well as a Topgolf entertainment venue. Plans are in the works for a large culinary campus where chefs can try different restaurant concepts.

City officials completed a master plan for the area in 2014 with the goal of increasing population density downtown by building apartment complexes with first-floor storefronts and office buildings that would attract tech-related businesses. Fadness said the success of the Depot apartments spurred other development that the master plan — which had a goal of a full build-out by 2030 — didn’t even anticipate. Much of the main segment of the blueprint, north of 116th Street, is well underway, with some projects already being developed south of 116th.

The blueprint follows a larger suburban trend to add vibrancy to downtowns by concentrating activity in a tight core. Fishers’ plan, like neighboring Carmel’s, includes sidewalks to encourage foot traffic and trails to accommodate recreation. 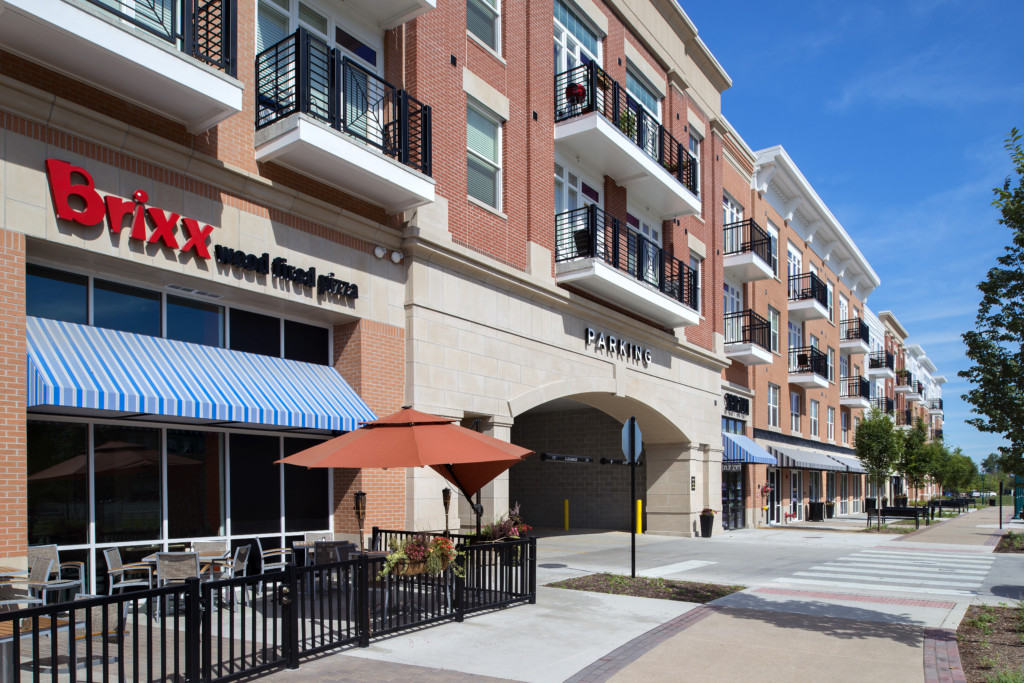 The Depot has 240 apartments and opened in December 2014 and is 90 percent occupied. The Switch, opened in July 2016, has 120 units and is 47 percent occupied, but experts said it takes 16 to 24 months to get to capacity. Both buildings have parking garages and reserve space for business on the first floor. Among the businesses that have moved in are two restaurants in The Depot — a wood-fired pizza restaurant, Brixx, and a burger restaurant, Flamme Burger — and one at the Switch, LouVino, serving small plates of duck breast and pork tenderloin.

The development is in line with a national trend toward rentals following the home mortgage crisis of 2008, said Tim Monger, president of the Hamilton County Economic Development Corporation. People were leery of home-buying, and developers jumped on the changing demand, he said.

“Coming out of the recession, the hottest thing became investments in apartments,” Monger said. “It was a combination of the economy and what millennials wanted.”

The number of apartments in Fishers has increased 34 percent since 2010, to 5,313 from 3,940. In Carmel, rentals have increased 35 percent and in Noblesville by 29 percent, according to CoStar, a Washington D.C.-based real estate market analytics group.

Apartment developers crave a mix of middle-class young residents and older so-called “empty nesters.” The developer of Depot, at least, said it is hitting the mark with those groups. The apartment rents range from about $1,000 for a one-bedroom unit to $3,850 for a three-bedroom.

Abhishek Bharga, a 28-year-old accountant, said he moved to The Depot from Arizona to be near his job at Roche Diagnostics at 9115 Hague Road, about three miles away.

“It was the first place I looked,” Bharga said. “I save a lot of money on gas.”

His friend, Hina Patel, 33, who also lives in the building, sad the residents take advantage of the building’s amenities such as a swimming pool, community room and gym. “We have wine-and-cheese gatherings, pool parties, Halloween parties where a lot of people participate,” Patel said.

Patel, also an accountant, finds the nearby restaurants convenient, especially Thai Sushi House across the street on 116th and Pita Pit, a franchise business.

“We go to about five of them regularly,” she said.

Office buildings and other businesses have also sprouted in the Nickel Plate District. Community Health moved into The Edge at the corner of 116th Street and Lantern Road. The building also has a coffee shop and an Escape Room, a team-building game site where players solve clues to get out of a locked room.

Fishers has also tried to brand itself as a destination for startups. A city initiative called Launch Fishers has helped the creative class develop ideas and products. The shared 52,000-square-foot workspace, near 1 North, has conference rooms, a coffee shop, even treadmill desktops for freelancers in the fields of technology, health information and biotech, among others.

While Fishers strives to create a downtown where residents walk, a nagging concern is that the Nickel Plate District is dissected by 116th, a four-lane street where cars drive at high speeds to get on and off busy I-69. To cross the street is to test the patience of frenzied drivers waiting for the light to change. Most of the current development is north of 116th Street, but more is planned south of 116th Street and city officials would love to have better connectivity between the two.

One solution, he said, could be a pedestrian bridge.

But for now, the city will forge ahead until the market or demographics tell it to cool down.

“This has happened faster than I ever anticipated: Fadness said. ‘I can remember when the only person you’d see walking downtown all day was a municipal worker.”