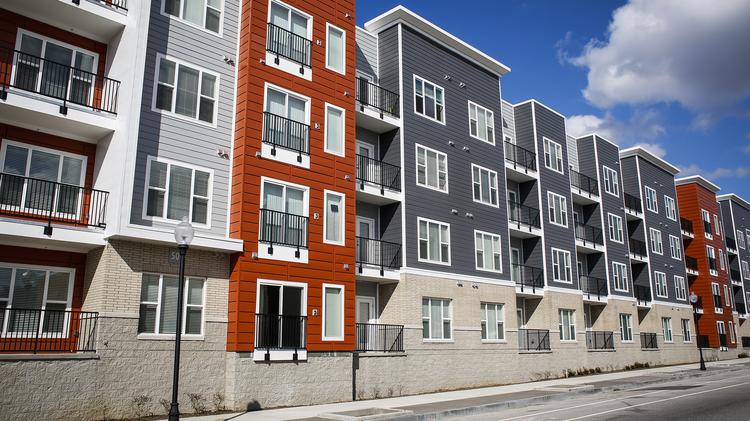 Downtown New Albany is taking on a new look with the construction of its first luxury apartment complex.

Indianapolis-based Flaherty & Collins Properties is putting the finishing touches on The Breakwater, a 197-unit apartment complex on four acres at 411 E. Spring St., off Fifth Street in New Albany. The site is the former location of Coyle Chevrolet.

Michael Collins, regional property manager for The Breakwater, said the final units should be finished by the third week of April. The Breakwater finished its first units in December, 13 months after construction started, and the first tenants moved in last month.

The occupancy rate as of Wednesday afternoon was 12.2 percent, according to Breakwater leasing officials.

The 206,000-square-foot complex is estimated at $26.5 million and is spread across three buildings, including two large apartment buildings with three and four stories.

Inside, The Breakwater is divided up into studio, one- and two-bedroom units that range in size from 517 square feet to more than 1,200 square feet.

Rental rates start around $780 for the smallest studio unit and exceed $1,600 per month for a two-bedroom corner unit.

In addition to the monthly rental rates, renters must pay administrative and security deposit fees, and residents can pay extra for an attached or unattached garage. There are nearly two dozen garages on site, and they’re available on a first-come, first-served basis.

The units themselves are equipped with granite countertops in the kitchen and bathroom, GE-branded washers and dryers, nine-foot ceilings, keyless entry, modern cabinetry and appliances and oversized tubs and showers. Some units have balconies, stainless steel appliances and programmable thermostats.

The complex also has a security feature that allows residents to unlock entry doors with their phone.

Individual floor plans for the complex follow the nautical theme with names such as the Anchor, the Starboard, the Admiral and the Captain.

Collins said this is the first development in New Albany for Flaherty & Collins Properties, but the company has property management experience in the Louisville area, including the Glenmary Village apartment complex in Louisville. You can learn more about the development at The Breakwater website.