River City News: At Last, a Plan is Forming for Covington’s 501 Main Property 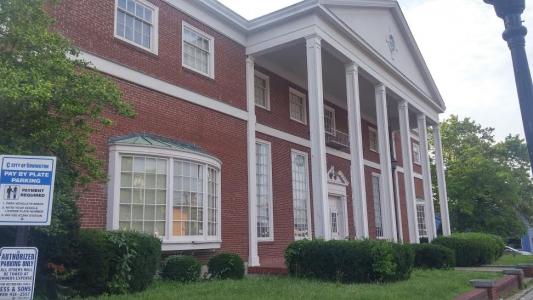 The large building known simply as 501 Main, which has sat vacant at the corner of 5th & Main Streets in Covington for years, is closer to a new life.

Or, the site is anyway. Flaherty & Collins Properties, the Indianapolis-based development firm will raze the structure and construct one or two new buildings that will house up to 200 high end apartments on the upper floors and commercial retail space on the street level.

The prized site is at the northern entrance of Mainstrasse Village and residents from the neighborhood and entertainment district came to City Hall on Wednesday to listen to the developers intentions.

“The first step is to figure out what the site is,” said Geoff Milz, economic development manager for the City of Covington. Milz said that the site – which also includes the main public parking lot that serves Mainstrasse – is “interesting” because there is a sliver of the parking lot that belongs to the owners of Smith Muffler, which sits across 5th Street to the north. So far, the developers have been unsuccessful in negotiating a purchase.

That won’t stop the development, though.

“We have had our sights on it for more than ten years. I’m surprised it hasn’t been developed,” said Deron Kintner of Flaherty & Collins Properties. He said his company specializes in urban infill developments. “The Village is already a great retail market, so we’re not looking to compete with that.” He said the retail component of the development would complement the existing retailers in the neighborhood.

“Our history goes back to this site in 2003 and we’ve had our eye on it and wanted to develop it for a long time,” said David Flaherty, CEO of Flaherty & Collins Properties, in a news release earlier this year. “We’ve got a lot of good ideas.” The ultimate idea will “make a real statement for downtown Covington,” he said. “And we hope this is the first of many developments we can do here in your city.” According to the firm’s website, Flaherty & Collins Properties has developed a high-rise luxury residential tower in Indianapolis, a market rate apartment building in St. Paul, and a variety of mixed-use suburban projects across the Midwest.

Milz explained to the residents in attendance that the City of Covington – which purchased the building in 2005 from Kenton County in an effort to stop a health clinic from opening – has entered into a “preferred developer agreement” with Flaherty & Collins Properties. In this phase, the firm will create a development plan and then return to City Hall to present it before a “development agreement” is reached.

There is no specific design for the development yet, but architect Mark Browning of Cincinnati-based PDT Architects said that he has “a pretty good idea of how it will go together” with the surrounding neighborhood, which is made up of historic 19th century homes and commercial buildings.
“The challenge is, we don’t want to come in here and try to recreate a 19th century model,” Browning said. “Our goal is to do a modern building that is sympathetic and complementary to the area it’s in.” He said the building won’t feature Victorian traits like brick and stone lentils or large cornices. “We’ll spend time talking about why our design is compatible.”
Residents on Wednesday mostly expressed concern about parking and their desire to see a grocery component at the site.
While no specific commercial targets have been identified, Kintner said that the spaces would be competitively priced. The apartments – whose tenants the retail spaces would serve – will be priced somewhere between the new apartments going up at Newport on the Levee and downtown Cincinnati/Over-the-Rhine. Parking concerns will be addressed, too. There will be a parking garage constructed to accommodate the residents and visitors to Mainstrasse and the apartments will be placed on top of it. The design will hide the garage, the developers said.
The design is also uncertain because of the issue with the sliver of land owned by the neighboring Smith Muffler. There will be another meeting scheduled when a design is ready to be presented publicly. The residential buildings are expected to be four to five stories high.
Kinter said that the development – which could start construction early next year – will bring a desirable demographic to the neighborhood. “Our renters are renters by choice. They could buy a home,” he said, noting that the company’s stats show that two-thirds are millennials and a third are empty-nesters. “That’s the segment of the population we expect to see here.”
Milz thanked the residents and developers for the meeting and said that the interest shows the quality of the project and the neighborhood. “We’ve got residents and businesses here, folks who’ve lived here for years and some for two months,” he said of the crowd at City Hall. “Mainstrasse is such a gem and this hopefully will build upon the success that is already there.”