Elkhart, IND – The City of Elkhart and Flaherty & Collins Properties announced today that it will develop a $25 million mixed-use project in downtown along the Elkhart River that features luxury residential apartments and retail space. The project will be developed on the former Elkhart Foundry site, which was demolished in 2010.

“We are really excited about this project for the City of Elkhart and its residents,” said Flaherty & Collins Properties CEO David Flaherty. “This project addresses the need for higher-end housing for young professionals and empty nesters in the area. We also believe this will provide employers with a fantastic, high-end housing option for their employees that does not exist today.” 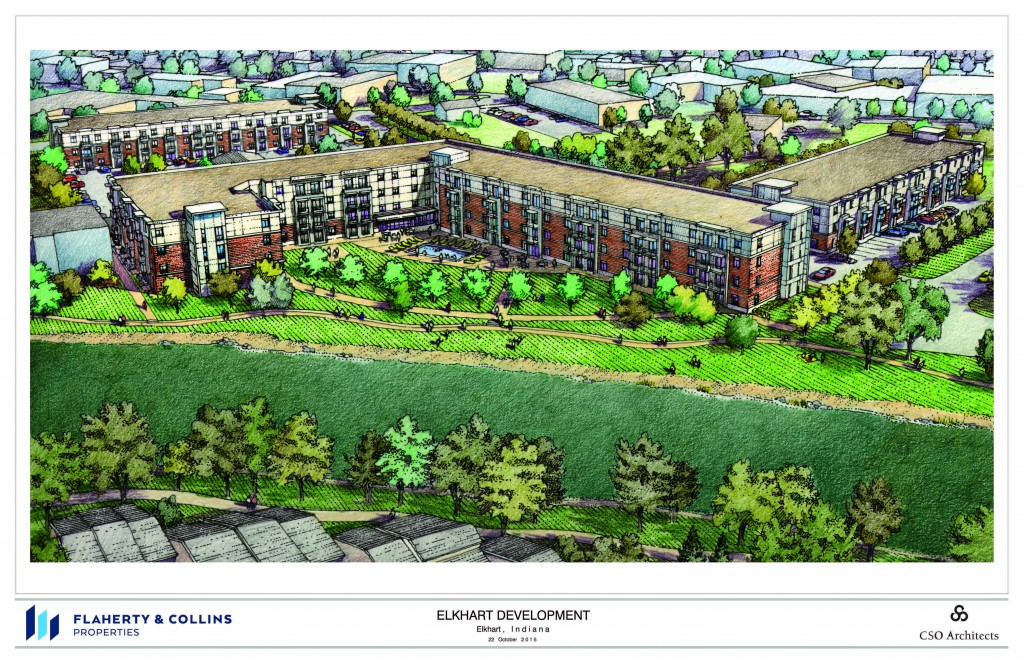 The downtown project will include 200 luxury apartments, 5,200 square feet of street-front retail space and 100 covered parking spaces. Apartments will feature high-quality, condo-level finishes and resort style amenities, including a heated salt water pool and fitness center. Rents will average between $700 a month for studio apartments to $1,200 per month for a two-bedroom apartment.

“I am impressed by the thoughtful investment Flaherty & Collins Properties is making in our downtown, and it sends notice once more that not only did the City of Elkhart survive the Great Recession, we are thriving as a community,” Elkhart Mayor Dick Moore says. “Flaherty & Collins Properties have proven themselves to be a developer that can deliver the Class A residential space that our community deserves and desires.”

The City demolished the blighted, 200,000-square-foot Foundry building in 2010, as it had become a safety hazard. The site was originally developed in 1878 as an ironworks, making castings of up to 5 tons for such industries as machine tool and press, printers, and waste management. The Elkhart Redevelopment Commission owns the property today.

“Statistics show that over 25,000 people commute into Elkhart County every day for work, but don’t live there,” says Brian Prince, lead developer of the project for Flaherty & Collins Properties. “The goal of this development is to attract and retain some of those individuals so that they live, work and play in Elkhart. By adding density to the downtown area, we will bring in individuals who will pay local taxes and bring in more money to the economy.”

Groundbreaking could occur as soon as spring 2016, with an estimated construction time of 16-18 months.