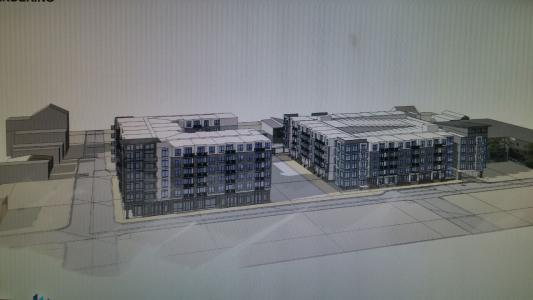 The Covington community got its first glimpse of the massive apartment project that will soon take the place of the so-called 501 Main building and adjacent parking lot in Mainstrasse Village.

Flaherty & Collins Properties, the Indianapolis-based firm behind the project, returned to Covington City Hall on Wednesday for a public meeting. A couple dozen residents joined city officials for the discussion and a presentation by Mark Browning of Cincinnati-based PDT Architects. Browning and Flaherty & Collins Properties Deron Kintner were previously in town in early July when they gave an overview of the project.

This time there were renderings to show, and while the design is not final, it helped illustrate the type of design and scale the project would bring to the city’s entertainment district.

Background: the 501 Main building was purchased by the City of Covington from Kenton County several years ago in order to prevent a health clinic from operating in the former bank building. The city solicited development plans this year and entered into a preferred developer agreement with Flaherty & Collins which will tear down the existing building and create a new apartment community on the site, which includes the large parking lot on 5th Street that serves Mainstrasse Village. Part of the parking lot, however, is a parcel owned by the entity that operates Smith Muffler across the street, and so far they have not reached terms to sell it, which prompted the development plan to include two separate buildings, constructed around the Smith parcel.

As it is now, the plan revealed two buildings – one with first-floor retail and five floors of rental residences, and another with five stories of residences wrapped around a parking structure. There may also be a swimming pool and other amenities added as the design evolves.

The look of the buildings is similar to the new apartments at the Banks on Cincinnati’s riverfront and to the new residential buildings that will be constructed at Duveneck Square in downtown Covington. Flaherty & Collins Properties hopes to have 200 units in all.

“In reviewing the two top prospects (to develop the site), what stood out as far as Flaherty & Collins Properties is their project really evolves through public input,” Carran said. “Every time they do a project it keeps improving.”